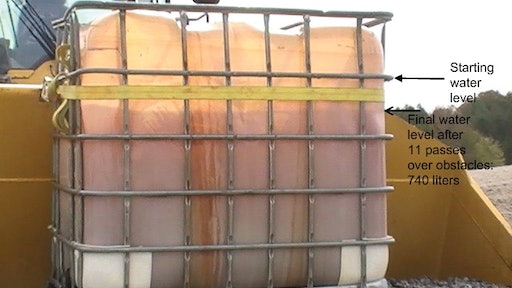 After 11 passes over a path covered with a few 2x4s, the radial tire loader went from around 900 liters of water in the bucket down to 740 liters.

Last week I had the opportunity to experience first hand the differences between radial and bias tires on earthmoving equipment. I spent a morning at the Michelin proving grounds in South Carolina and got the chance to operate wheel loaders with both types of tires.

Pros and Cons of Radial vs. Bias-Ply

While this is only the second time I've gotten in the operator's seat of a wheel loader, even as a novice I experienced some differences between the types of tires. The biggest differences I felt and saw were comfort level and containing the load in the bucket.

For the demonstration, Michelin had two Komatsu WA380 wheel loaders. The loaders came off the assembly line in sequential order to provide two machines as close to identical as possible. A straight track was set up with multiple 2x4s on the ground. The two loader buckets were also filled with gravel and fitted with a full tub of water secured on top of the gravel. The tubs were cut open at the top so we could see how much water splashed out while driving. Both tubs were filled with the same amount of water.

I first drove the wheel loader fitted with radial tires over the obstacles followed by another event attendee in the bias tire loader. After that, we switched spots - I got into the loader fitted with the bias tires - and we drove down the same path. This two trip cycle was completed five times (plus the first demo we saw, it was a total of 11 passes for each loader over the obstacles) - about an hour's worth of time.

(Video: Radial versus Bias Loader Tires - footage from the experiment at the Michelin proving grounds.)

Here's what I noticed from my brief time in the loaders. I could feel a smoother ride with the radial tires. I was not bouncing up and down as much when I drove over the obstacles. I could hear the difference, too. The contents of the bucket were not bouncing around as much on the radial tire loader.

But I think the visual proof was the most convincing. While both loaders splashed water with each trip, the bias tire loader continued to splash a lot of water each trip. The radial tire loader continued to splash but in significantly smaller amounts. After the last pass, there was a 390 liter difference between the water left in the two tubs. And the amount of water lost in the bias tire loader over the entire experiment was significantly more than the radial tire loader (reffer to picture of measurements at the top of the page).

While this was just one, small experiment the results were very interesting.

The people from Michelin did point out that bias tires may be the more cost affordable option at the time of purchase, but they touted radial tires as being the most cost beneficial over time - especially when you factor in productivity and fuel efficiency.

Do you equip your earthmoving equipment with radial or bias tires? What is your experience with these types of tires? Why would you choose one over the other? Share your comments and opinions with us below.

How to Select the Right Tires for Wheel Loader Applications