Spending on residential construction continues to carry buckets of private and public nonresidential red ink, while the industry yearns for stimulus spending and infrastructure plans to revive commercial construction 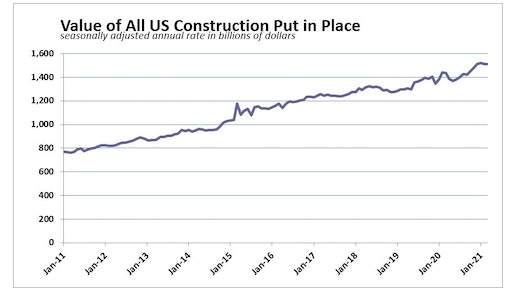 The value of U.S. construction put in place in March eked out 0.2% growth after falling 0.6% in February. Commerce Department estimates measured weaker than expected performance, as economists polled by Reuters had forecast construction spending surging 1.9%.

Construction spending, which accounts for about 4% of gross domestic product, in the first quarter of the year was 4.5% greater than in 2020.

data: US Department of Commerce; table: ForConstructionPros.comSpending on private construction projects rose 0.7% in March, after a 0.3% drop in February, lifted by investment in single-family homebuilding. There is strong demand for housing but supply has lagged amid expensive building materials as well as land and labor shortages.

“While the longer-term outlook for nonresidential construction is superb, the pandemic is lingering, creating much damage to commercial real estate fundamentals,” said Associated Builders and Contractors Chief Economist Anirban Basu. “The lodging, office and commercial segments experienced declines in spending in March. Office vacancy rates are elevated in many markets, and the industry experienced negative net absorption. The trials and tribulations of hotel operators, retailers and restauranteurs are also well known.”

Spending in five of 12 public nonresidential segments declined in March, with hefty drops in the two largest segments, and ten public segments are down substantially year-to-date.

“While large-scale federal infrastructure outlays are likely in the future, that money has yet to arrive,” said Basu. “State and local government finances have generally held up far better than many had predicted earlier in the COVID-19 crisis, but many governments have had to spend significant operational sums to countervail the public health crisis and therefore had to redirect money away from infrastructure.

“ABC’s Construction Backlog Indicator has foreshadowed this state of affairs for months. The most recent readings suggest that the construction spending recovery will be slow over the near-term. However, as the broader economic recovery picks up additional speed later this year with more pervasive vaccinations and re-openings, both private and public construction spending should begin to manifest more positive momentum later this year and into 2022.” 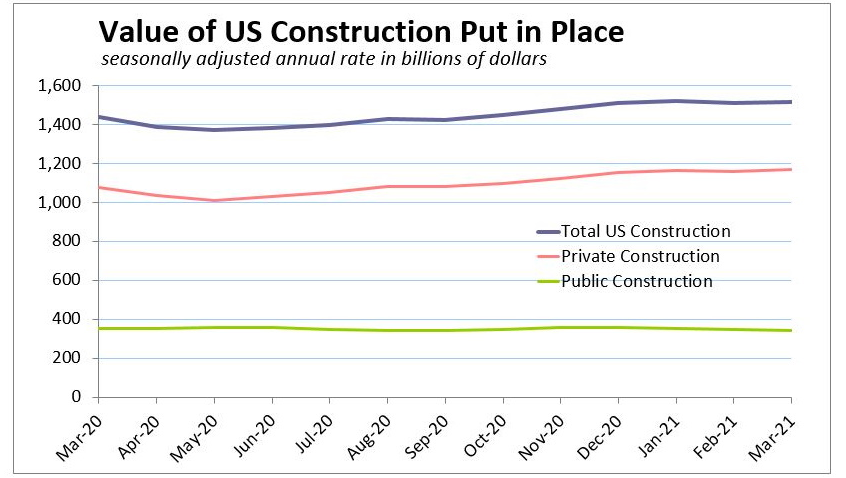