What Contractors Need to Know about Field Testing Concrete 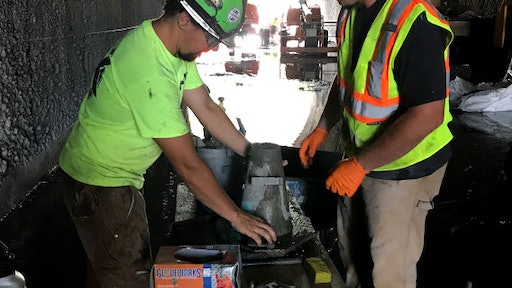 A shortage of skilled labor continues to be the dominate issue in the construction industry, and rightfully so. However, delays in construction schedules have always been a thorn in the side of contractors, and history shows that probably won’t change.

The success of any construction project—single family home, school, hospital, stadium, restaurant—is predicated on preventing problems that cause costly delays. While there are many factors that can disrupt a schedule, few are more detrimental than problems with the quality of concrete on a job. Best case scenario, the project will be temporarily halted until test results are validated. Worst case scenario, the original work will be removed and redone. Either way, bad news for project efficiency, quality and profitability.

“Nothing is more frustrating than starting construction on a new home and almost immediately being forced to stop because some building material can’t meet spec,” says Ben Morris, owner of Atlanta-based custom builder/developer Paramount Reality Group. “Unlike siding, roofing or some other product used later on the project, concrete is literally and figuratively the foundation to any successful build. Nothing else can happen until that concrete is right on a job, so we count on manufacturers to live up to their performance claims. Otherwise, we lose time and money get the project back on track.”

Fortunately, unlike unpredictable weather, project delays can be avoided by correctly field testing concrete products using appropriate methods and procedures. The process is grounded in following standardized test methods defined by the American Society for Testing and Materials (ASTM), the American Concrete Institute (ACI), the American Association of State Highway and Transportation Officials (AASHTO), or another organization approved for the specific project at hand. The field testing should also be conducted by a ACI concrete field testing technician or comparable professional certified to collect, test and analyze concrete samples from a jobsite according to ASTM C 31 (Standard Practice for Making and Curing Concrete Test Specimens in the Field) and ASTM C 39 (Standard Test Method for Compressive Strength of Cylindrical Concrete Specimens) or other validated methods.

Whether it’s the foundation for a 10-story building, footings on the deck of a custom home or the industrial floor of a warehouse, field testing the concrete to make sure it meets required compressive strength is critical. For this reason, manufacturers diligently conduct quality control compressive strength tests before their concrete enters the market. However, field testing by a certified third-party organization should take place on every job.

Furthermore, contractors should clearly understand the process and be engaged with the field-testing organization to make sure results are accurate. It also allows a contractor to quickly and effectively react to field tests that suggest compressive strengths fall short of project specifications. The following are several important areas of field testing to understand and track.

It may seem odd, but field testing the compressive strength of concrete starts long before it sets or cures on the jobsite. Measuring the consistency of the concrete, or slump, following ASTM C 143 to confirm it’s within the specified range is the first step in field testing.

While ready mix concrete producers simply report the slump prior to delivery, for packaged concrete manufacturers, it’s important that the quantity of water added in the field is both documented and confirmed to produce a slump within the manufacturer’s specified range for that concrete.

A standard pre-packaged concrete typically specifies a slump of 2 to 3 inches, while there are other concretes designed to be used at a higher slump, such as 3 to 5 inches to meet or exceed specific project requirements. The more water that is added to a given concrete, the higher the slump it will have. The higher the slump for a given concrete, the lower the strengths, so it is critical to stay within the specified slump range.

Understanding the jobsite environment also plays an important role in field testing the compressive strength of concrete specimens. If a concrete specimen freezes within the first 24 hours after being molded, or before it has reached a minimum strength of approximately 500 PSI, it will lose significant overall strength. Because of this, concrete specimens should be stored for up to 48 hours in a moist environment having a temperature of 60 °F to 80 °F (16 °C to 27 °C).

After completion of initial curing, but within 30 minutes of specimens being demolded, the environment in which the specimens are stored must be even more tightly controlled, with a temperature of 70 °F to 77 °F (21 °C to 25 °C). There must be free water on the specimens at all times, which can be achieved through use of water storage tanks or moist rooms. By closely managing these conditions during the entire remaining curing process, the field created samples should accurately reflect the compressive strength of the concrete.

It may be surprising how many factors can impact the quality of the cylindrical concrete specimens, which ultimately are used to determine the compressive strength. Poorly made specimens may produce false low compressive strength results. The number of concrete cylinders to be cast for each test age is typically dictated by the project requirements. If the number is not specified, no fewer than two, and preferably three, are generally recommended for each test age. A single specimen will not provide sufficient data to indicate if that specimen was faulty.

The specimens must be cast on a flat and level surface that is not exposed to any movement due to nearby forklift, crane or other vehicular traffic, or even nearby concrete mixers in operation.

The method used to place the concrete into the cylindrical molds (of size as directed by project requirements) is also critical. The concrete must be added in multiple layers, with the exact number of layers depending upon the size of the aggregate. Each layer must be of approximately equal depth and consolidated, typically by rodding and tapping the outside of the mold. Not following the consolidation requirements as defined in ASTM C 31 can leave air voids, which will produce false low compressive strength results. Similar to finishing a slab, the concrete at the surface of the cylindrical molds should not be overworked. The finished surface should be a flat and even with no pits or bumps greater than 1/8 inch. If not, it will result in uneven contact with the platens of the compressive strength machine, which again, may result in false low compressive strength results.

As we all know, damage can occur during the transportation of anything from one place to another. Concrete specimens are no different. Specimens should never be transported until at least 8 hours after the concrete has achieved final set. Final set is when the concrete has completely lost its plasticity and has hardened. If the concrete specimens are moved sooner than eight hours after final set, they may be damaged, causing false low compressive strength results.

During transportation, moisture loss must be prevented by covering with plastic or wet burlap like that used when curing concrete slabs or by using other means. Loss of moisture will result in lower compressive strength results of the specimens.

With proper slump, curing conditions, specimen preparation and transportation verified, the final and ultimate test begins. Each secured concrete cylinder should undergo a break test at the manufacturer’s laboratory or other approved third-party facility. The equipment should always be properly calibrated. The load should be maintained at a rate of 27 to 42 psi/second. Testing should be continued until the sample fails and presents a well-defined fracture.

The strength of the concrete is determined by dividing the maximum load by the area of the cylinder’s end. Calculate the average of all specimens from the same test age then round to the nearest 10 psi. If measured strength is lower than expected, examine the specimens to see if they are manifestly faulty, for example, if they contain large air voids indicating that they were not properly compacted. Results of any such specimens should be discarded.

When the standard procedures for field testing are followed correctly, contractors can count on concrete that will keep projects on schedule.

“An early problem with concrete quality that adds two weeks to a project schedule can quickly escalate into two months dealing with building code officials and rework,” adds Morris, a 20-year industry veteran. “We avoid that situation by conducting field tests regularly on all jobs.”

Wendy Henry has been the quality assurance manager for The QUIKRETE Companies for 16 years. She gained her initial experience with cementitious products as a quality control manager for Custom Building Products, which has since become a QUIKRETE Company. She received her BS in Industrial Engineering along with a Certificate of Industrial Psychology from Georgia Institute of Technology. She followed her passion for quality to obtain her MS in Quality Assurance (Engineering Technology Emphasis) from Southern Polytechnic State University and become an ASQ Certified Quality Engineer.  She is also a LEED Green Associate.