Digging Below the Surface 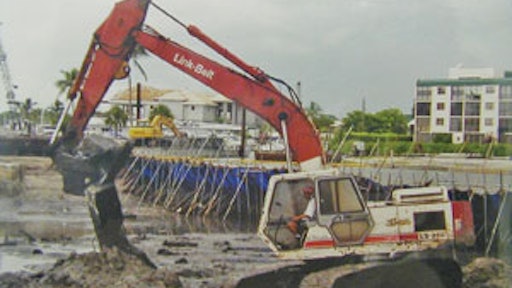 Phase 1 of the Naples Bay Resort project in Naples, FL, involves converting a 50-year-old marina into a multi-million dollar development featuring an 85-room hotel, 30 waterfront condominiums, 97 boat slips and 33,000 sq. ft. of upscale retail, restaurant and club space. But to accommodate these luxury amenities, the old structures first had to be torn away and the marina deepened to provide access for the larger yachts that will ultimately use it.

Gulf Shore Site Development, a third-generation, family operated site development firm based in Naples, was contracted to complete the demolition of structures and docks around the marina, as well as lower the marina basin. The demolition portion of the job was valued at $100,000, while the initial estimate for lowering the marina floor was set at $600,000.

The demolition process began on July 5, 2004, and involved removal of roughly 60 covered docks, a restaurant, a boat sales center and repair station, a large storage building and other structures. Gulf Shore used one of its LBX Link-Belt excavators with a hydraulic thumb, as well as a Case 9030 excavator with a fixed thumb, to pull down the old structures and load material onto a barge for removal to an unloading area. The demolition process took roughly two months to complete. Then, the real work began.

The marina consists of a small body of water opening out into the Gordon River, which in turn empties into nearby Naples Bay. The bay itself drains into the Gulf of Mexico. Because of the marina's proximity to the bay area, environmental issues were of primary concern when developing a plan for dewatering the project site.

"The Corps of Engineers was, of course, watching us very carefully, along with the state Department of Environmental Protection," says Jim Raiser, chief estimator and overall project manager at Gulf Shore. "One of the requirements was to make sure we kept all the contaminants from the marina on the marina site." This included 50 years worth of sediment and debris that had settled to the bottom of the basin.

"We had thought about building an earthen dam across the entrance," says Raiser. "But because Naples Bay is very keyed up about pollution and trying to regenerate the bay itself, we were afraid of the rain and the runoff running into the bay. So we were trying to find a really clean operation."

After doing some Internet research, Raiser came across the Portadam temporary, portable water diversion and fluid retention system. This system consists of a free-standing, welded tubular steel framework support system and a flexible, waterproof fabric membrane. Support members are designed to transfer fluid loading to a near vertical downward load, permitting installation on solid, impenetrable foundations without the need for internal bracing. Hydraulic loading on the membrane assists in sealing and stability of the structure.

Representatives from Portadam came out to the site to discuss different approaches to the project. It was decided that a roughly 175' x 60' Portadam system would be installed across the center of the marina, essentially dividing it in half. Twin 24-in. pumps, provided by MWI Pump Co., would pump the water out of the first half, then a second 160-ft. dam would be set up across the marina's mouth and the remaining water removed to expose the marina floor.

The next question was how to remove contaminants in the water. "We had to figure out how to purify the water before we discharged it back into the river because of the pollutions and the mud and silt in the original area," Raiser notes. Portadam and Gulf Shores came up with the idea to build a 1-million-gal. holding tank on shore. "Water was pumped into the holding tank right out of the basin, then we set up filtration using turbidity fence curtains."

Inside the holding tank, Gulf Shores also constructed two "chimneys" connected to four drainage pipes. "It's like a skimmer so that only the top of the water was being drained off — it was the cleanest portion of the water," says Raiser. "The water would fall down out of the chimney and out the bottom into the drainage pipe."

When the first section was nearly drained, chemicals were then used to band together the added sediment, causing it to fall directly to the bottom of the basin and preventing it from being discharged into the river.

Pumping water from the first half of the marina took roughly five days. Once it was completed, Gulf Shores brought in its two John Deere 650 dozers, as well as a larger rented New Holland dozer, to push the thick layer of mud to the sides, where it was scooped out with excavators.

It was necessary to remove the mud in order to get at the underlying surface, which consists of a layer of rock. "They wanted to remove some of this rock to form a deeper channel so they could sell the slips they're going to build for more money for bigger boats," Raiser explains.

Once the mud was removed from the first half of the marina, the second Portadam was installed at its mouth and the water pumped out. This allowed the first Portadam to be removed. "We had the whole marina exposed, which is about 2.2 acres," says Raiser.

The next step required removing 2 to 2.5 ft. of rock across the marina floor. "We had talked about hammering the rock out, but the Corps of Engineers permitting stated that if we were to undercut below a certain depth, we would have to fill back in with sand," says Raiser.

After doing feasibility studies and assessing the cost, Gulf Shores quickly realized it wasn't economical to use hammers. "When you cut the rock out, you usually have to cut it down almost to the bottom of the rock," Raiser explains. "In some spots, it was 5 to 6 ft. thick. So we would have had to fill 3 to 4 ft. of sand back in. That's why we went with the milling setup just to cut the top 2 ft. off."

The subcontractor Gulf Shores hired to complete the work came out and successfully tested the equipment to be used. But a problem with one of the original permits secured by the environmental engineers delayed rock removal by several months.

"Unfortunately, the contractor we had hired had another commitment that he couldn't wait for the permits," says Raiser. "So when the permits finally came, we had to look for another source."

Asphalt Mining Services, Davey, FL, was brought in to complete the milling process using a Roadtec RX-50 cold planer. "They strip out about 2 to 3 in. of the rock at a time," says Raiser. "As they cut the rock, we go behind them with the front end loaders and dozers and scrape it up and then bucket it out."

The rock removal process took around two weeks to complete. As the rock was being removed, Gulf Shores filled in all the "nooks and crannies" and leveled off the area. The holding tank was then disassembled — a process that takes as much as four days — and the dam was removed.

Removal of the dam took about three days. "We actually have to dive down and pull the pins — the feet that hold the framework up are pinned right in the solid rock," says Raiser. After the pins are removed, a crane is brought in to lift the framework out piece by piece. "Then we bundle it up again and Portadam hauls it off to the next job," Raiser adds.

Phase 1 of the resort project was completed in the Fall of 2005. Phase 2 will involve widening the river channel slightly. Given its history with the developers, as well as its successful work on the marina project, Gulf Shores anticipated being a solid contender for this portion of the project, as well.

Although weather was generally good during most of the first phase of the Naples Bay Resort project, the 2004 hurricane season brought some unexpected delays, with three separate storms passing near the Naples area.

"Because we were right at the river at the end of the bay, we were always worried about water surge," says Jim Raiser, Gulf Shore Site Development. "It was 4 or 5 ft. above the ground in some of the really bad hurricanes in the area, which would be almost a 7- or 8-ft. water surge."

Heavier equipment left at the site was moved to a higher elevation. "Even though it was more exposed to the wind, we were more concerned about the water surges," Raiser states.

The holding tank was also an issue. "We didn't want it to collapse, so we took extra precautions. We double-tied the lining down," Raiser points out. "Any place we could park heavy equipment around it to block some of the wind, we did."

To prevent the dams from being damaged, water was added back into the basin each time a hurricane approached. "We would stop the pumping operation and let the water come up a little bit," says Raiser. This helped to equalize the pressure on both sides. "We did have to re-shore the dams that went across the basin occasionally, but nothing serious."