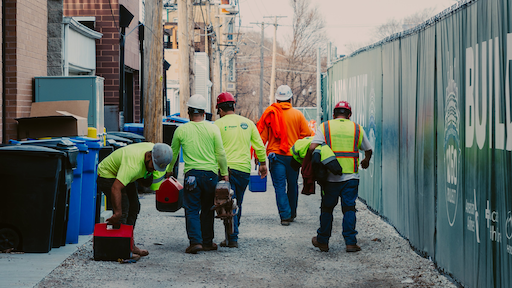 There are 500,000 jobs open in the U.S. construction industry, says Tony Rader, 2019 National Chair for the Associated Builders and Contractors (ABC). That’s why the ABC plans to redouble its efforts to attract, recruit and educate workers.

ABC members currently invest $1.1 billion in workforce training for 476,000 individuals annually through more than 800 apprenticeship, craft training and safety training programs set up by ABC chapters across the country (https://workforce.abc.org/). Yet, growing the number of industry workers calls for another form of education.

“Kids sitting in class hear a construction [representative] come in and talk about the industry and you know what goes through their mind: ‘I'm going to be digging a ditch... I'm never going to be anything more than the guys I see working on the field,’” Radar comments.

Rader, a 35-plus-year industry veteran who currently serves as vice president for National Roofing Partners (NRP), believes education is the key to overcoming the lack of understanding of the career paths available, whether it’s architecture, engineering, law, accounting, etc. “We have all these fields in the construction industry. It’s mainly a need to educate young men and women that they do have several paths to go into,” he says.

“We have to get them in, get them educated and give them a dream,” he continues. “Where else can you come out [of school] with a high-paying job, benefits and a solid company? These students come out with an apprenticeship program certificate that allows them to enter the workforce on Day 1, providing a good living for themselves and their family.”

Use Technology to Get, and Hold, Their Attention

Over his tenure in the industry, Rader has witnessed firsthand the struggle to attract young people. And it isn’t getting any easier.

“Millennials were getting a bad rep for a while, but we have some extremely talented and smart millennials that are working in the industry right now,” he says. “The problem we have is the current generation that's in school right now.”

Rader cites a study that shows you have just eight seconds to capture the attention of today’s youth. “After eight seconds, they ‘swipe left’ and they've moved on,” he says. In order to capture and hold their attention, the construction industry has to “change and morph and we aren't changing and morphing” to meet that challenge.

This is where marketing the technology currently in use within the industry can help. “This is another avenue to attract that young individual into the industry who thinks we are just working with shovels and digging holes,” Rader states. “That's what these individuals look for.”

Take Rader’s company, NRP, for example. It uses technology such as 3D AutoCAD design software and 3D printers in the office and mobile devices in the field. “Our superintendents are out in the field doing daily reports, pictures, timesheets on iPads,” he notes.

The organization is also preparing to roll out a nationwide drone assessment program that will shrink the process of cost assessments for roof repair or replacement from as much as two weeks down to two days or less. Though the company is working with a third-party drone service, drone operations is yet another job opportunity emerging in the industry.

The key is to make prospective employees aware of the advances being made within your company and within the industry. “Once they get educated that we are a sophisticated organization, and a sophisticated industry, then that answers the question” of how to hold their attention, Rader asserts.

To fill the labor gap, the ABC is targeting young adults at the high school and college level, as well as those coming out of military service. “We signed a pledge that we're going to hire 100,000 veterans. That is a market that we definitely want to tap into,” says Rader.

Training will be provided through ABC’s numerous educational programs, as well as by members that have their own apprentice shops, and even charter schools.

“ABC National is a huge resource,” says Rader. In addition to construction management courses and leadership conferences, the ABC has partnered with the NCCER (National Center for Construction Education & Research) to provide the standardized curriculum for craft training and assessment programs. “That provides credentials for more than 70 crafts, and those are located in the U.S. and in 20 countries.

“We have training centers across the United States,” he continues. “Our chapters provide training for masonry, HVAC plumbing, electrical, mechanical, fire, sprinkler, drywall – you name it.”

The ABC is also looking to broaden the diversity within the industry by attracting different races, ethnicities and genders. Rader shares a couple of his own success stories in giving what might be deemed “non-traditional” construction employees a chance.

Consider “Julio”, who was hired as a concrete laborer by the company Rader worked for at the time. Following a workplace injury that required rehab and light duty, Rader brought the worker in to discuss his qualifications. It turned out that Julio, who didn’t speak English, was a registered architect in Mexico. Rader gave him a chance as an estimator, and now Julio is successfully overseeing the concrete estimating department for a large company in the Dallas area.

“We have stories like that across ABC of individuals who were given the opportunity to come into the construction market, get educated and they got a dream and now they're running a [department or] company,” says Rader.

Rader believes in giving people of all backgrounds a chance. “When you look at our firm, we're very diverse,” he says of his division of NRP, where women may actually outnumber the men. This is by design, particularly for roles where attention to detail is critical.

“If I had a choice of two individuals who have the same qualifications and one was a woman and one was a man, I'd hire the woman,” he states. “I say that because the level of detail that a young woman brings to a project is great. But the struggle is getting the [older workers] to accept that young individual.”

Clear A Path to Bring More Women Into Construction

In Rader’s experience, race, gender or ethnicity have nothing to do with acceptance. “What I find is that once these young men and women have proven themselves in the construction industry, everyone respects them,” he comments. “I've had that happen time and time again.”

It also has nothing to do with their success on the jobsite. He points to a young individual he hired a number of years ago. “I put her in the position of project manager and she just excelled from her very first project manager job,” he says. “She is now running $20 million to $30 million projects here in Fort Worth.

Tony Rader is a 35+ year industry veteran in general construction. He started out in his father’s construction company before moving on to own and eventually sell his own. He has since held senior management positions in large Dallas area construction firms including AUI Contractors and Schwob Companies, plus formed a consulting business to aid and mentor construction businesses. He is currently vice president of National Roofing Partners, heading up its recently formed telecom rooftop services sector.

Through this partnership, IUOE has begun using an ALLU Transformer screening bucket for its pipeline application training program.
ALLU Group
July 1, 2020
Follow Us