The right equipment combination helped Cobalt Construction overcome the unique challenges of a remote location to preserve and grow the White Pass Railroad in Skagway, Alaska 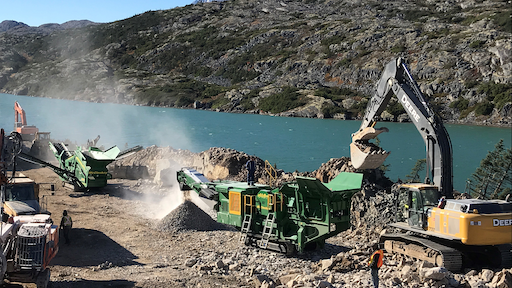 The work site was next to a lake which required environmental protection measures to be put in place and was constantly monitored for compliance.
McCloskey

Jon Rudolph has a long relationship with the railroad, from his father serving as a personnel safety manager in the 70s to his latest project — a loop for the White Pass Railroad in Skagway, Alaska designed to allow more people to experience the remote beauty of the north.

Rudolph serves as the vice president of operations for Cobalt Construction, the company chosen to work with the new owners of the historic railroad to expand and enhance service for the cruise ship industry. Deemed one of the most popular land-bound destinations for passengers of cruise ships tying up at the port in Skagway, the railroad was originally built to transport those seeking their fortune during the Klondike Gold Rush in the late 1800s, and today still takes close to 7,000 passengers up 3,000 feet in elevation in just 20 miles each day. The breathtaking route is filled with glaciers, gorges, waterfalls, tunnels and trestles.

White Pass Railroad changed hands over the summer of 2018, with new owners who have a unique understanding of the future requirements of the cruise industry, as well as a deep commitment to the historical significance of the railroad and Skagway itself. With the change came the opportunity to expand. They turned to Whitehorse, Yukon Territory-based Cobalt Construction, a large-scale earthworks company that specializes in road construction, bridges, mine development, contract mining and mine site remediation throughout the north.

“Our expertise has always been around anything that involves moving rock and dirt,” Rudolph said. “Building roads, dams, airports, contract mining, mine reclamation work — all of this served as groundwork for spinoff work with White Pass.”

A New Turnaround for Rail

White Pass invested in a new turnaround loop to increase ridership capacity from 7,000 to 10,000 people daily, putting more trains in operation and providing a speedier return to Skagway. The existing system requires trains to decouple and creates a bottleneck. The new loop would fit as many as three trains and allow them to turn around and head down the mountain.

The project scope included clearing the site for the installation of track to create the turnaround, as well as crushing and screening rock for railroad ballast needed for track stability. The project came with unique challenges. Its remote location had the potential to hinder the supply of materials and manpower to get the job done before winter. Ironically, while Cobalt has built most of the major highways in Northern Canada, this site is inaccessible by road.

“Everything that has to go into that jobsite — literally everything — goes in by train: the fuel, the explosives for blasting rock, the groceries, everything. White Pass is supporting us 100% because we can’t do it without them,” Rudolph said.

This required any supplies and equipment to be transported in and out either by locomotive work train or small casey car with a couple of trailers behind them. Explosives needed to be brought in daily because the contractor couldn’t store much on site due to the proximity to the active railroad.

Cobalt management needed a crusher and screener to crush and size the thousands of tons of ballast needed, and the transportation constraints required the contractor to consider not only production requirements but also the load sizes of the equipment to ensure the railroad could transport it. Management sought advice from Bison Iron, a heavy equipment dealer based on the west coast.

“We could have used a larger crusher, but we couldn’t have gotten it on the train,” Rudolph noted. “When we started to talk with Bison Iron, they understood the unique challenges, but also saw the great opportunity if the right equipment for the job could be brought in.” 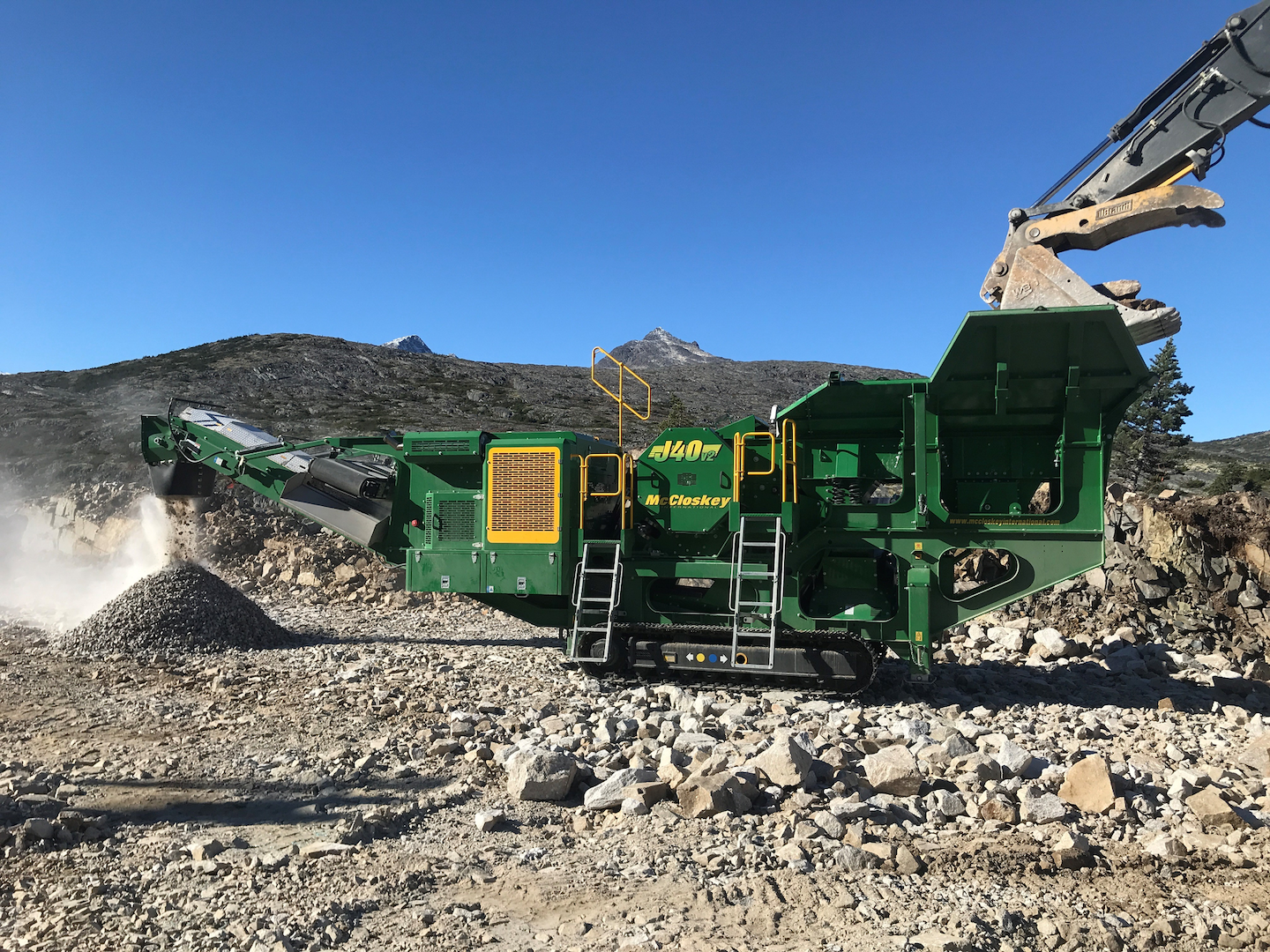 The J40V2 crusher quickly showed it could outperform much larger versions due to features like steeper angles on the jaw and wider opening for enhanced production. Cobalt used the equipment to crush granite to 2.5-inch pieces for ballast.McCloskey

Ultimately, Bison Iron and Rudolph agreed that a J40V2 jaw crusher and an R70 screener would be the best fit for the job. Rudolph was sold on the sales support, the fit of the equipment for the project and the reputation of the manufacturer.

After setting up camp, Cobalt got to work clearing a path for the tracks through the solid rock mountaintop. The contractor primarily used a drill and blast method, moving a total of about 26,000 to 27,000 cubic meters of granite by the time the project was complete.

It wasn’t straightforward, however, as the work site was next to a lake which required environmental protection measures to be put in place and was constantly monitored for compliance. Crews installed floating silt curtains in the lake to catch blast debris.

Cobalt was also responsible for supplying ballast to support the new tracks, which meant putting the new McCloskey J40V2 crusher and R70 screener to work.

With its trim dimensions and track mobility, the J40V2 was moved onto the new quarry, set up and running in record time. The crusher quickly showed it could outperform much larger versions due to features like steeper angles on the jaw and wider opening for enhanced production. Cobalt used the equipment to crush granite to 2.5-inch pieces for ballast.

The material was then sent through the R70 screener to remove fines and create the finished product. The durable R70 was more than capable of taking on the job and paired well with the crusher. Both the crusher and screener were self-propelled, allowing maximum mobility around the site.

“Some of our guys have run crushers before and been around crushers. When we were considering purchasing the J40V2, my superintendent said these things are built tough. You see it out here — this is going to last a long time,” Rudolph said.

Rudolph also emphasizes how important the after-sale support is, particularly in remote locations. He noted that Bison Iron spent several days on site assisting with setup to ensure optimal production, and was always available to answer questions over the phone.

“Bison Iron was instrumental in our choosing McCloskey, and the support and training they provided was absolutely first rate. When you are in remote sites, having someone as knowledgeable and responsive as they are makes all the difference,” Rudolph said.

Before the project shut down for the winter, the jaw crusher and screener ran 24 hours a day for 10 days to stockpile ballast for the start up in the spring. Crews finished with about 20,000 cubic yards of ballast.

The site’s remote location brought additional challenges to the project. Emergency maintenance issues occasionally required a mechanic to be brought in by helicopter. In addition, because the site sat on a solid rock mountaintop beside a lake, the team couldn’t install a septic system. Cobalt instead used a storage tank on site which was pumped out weekly and taken out by train to Carcross’ sewage treatment facility in the Yukon.

“It’s a very unique site and project, and we have a super crew out there,” Rudolph said. “There’s no room to install a standard camp, so accommodations are comfortable but can be tight. We make do and everyone’s happy to be part of the group.”

Challenges presented themselves more as winter moved closer. In mid-November the casey car, which brought explosives in to the site, couldn’t make it due to large drifts of snow despite several attempts. The team called the work train up from Skagway, 20 miles away, to clear the snow. Normally the train would not be running at that time of year, but the commitment to getting the loop finished was strong among all project team members. Partnerships are key to success, and Cobalt works hand-in-hand with the American work trains coming out of Skagway which work with the Canadian maintenance. The site sits right at the border, and the cooperation is visually reinforced with the two national flags only a few feet from each other. In another instance of weather-related issues, a crew was stuck on site for four days in December because of whiteout conditions.

Cobalt finished its portion of the loop project in December 2018. White Pass wrapped up installation of the ballast and tracks in early 2019 before the trains started on April 27th.

Though the contractor is done with the White Pass loop project, Cobalt will return in spring to build more ballast for White Pass for maintenance and other projects. This will mean continued use of the crusher and screener ­— equipment Cobalt typically wouldn’t own — allowing them to prove their worth as White Pass has indicated it wants the contractor to work 2 to 3 more years assisting with upgrades to the entire railroad system.

The White Pass multi-generation commitment is infusing the railroad with new life. Like Rudolph, Superintendent Rail Operations Mark Taylor at White Pass in Skagway has the rail line in his genes. He’s a third generation White Pass employee. His grandfather worked with Jon Rudolph’s father in the 70s, while his grandfather was director of White Pass in the States. Rudolph’s father was personnel safety manager in Canada. Now Jon’s son, Shaun Rudolph, runs Cobalt and is a contemporary of White Pass’ owners. As the railroad continues to grow, it seems their legacy will, too.