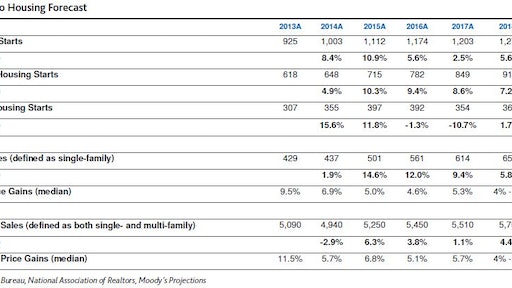 A just-released outlook for the US homebuilding sector remains positive, reflecting Moody’s analysts’ expectations with respect to the fundamental business conditions in the industry over the next 12 to 18 months.

Moody’s analysts weighed in on the homebuilding outlook and analysts’ expectations for ongoing industry consolidation.

“We remain positive on the US homebuilding market, as momentum in key underlying drivers of housing demand offsets signs of nascent headwinds," stated Joseph A. Snider, Moody's vice president. "The homebuilding expansion, now in year seven, and the overall economic expansion, now in year nine, show few signs of slowing, despite rising interest rates and trade war anxieties that are beginning to raise recession fears.”

“We view the homebuilding industry as still having significant further room for consolidation," added Natalia Gluschuk, Moody's assistant vice president. "We believe acquisitions will be selective and well-spaced out, and expect public-to-public large transformational purchases to continue as builders compete for market share, while public-to-private purchases will extend reach into new and existing markets.”

Pace of US Construction Spending Drops Unexpectedly in June