Nonresidential construction ended 2018 up 4.0% year-over-year for the month of December, with 2019 poised to be a good year for contractors 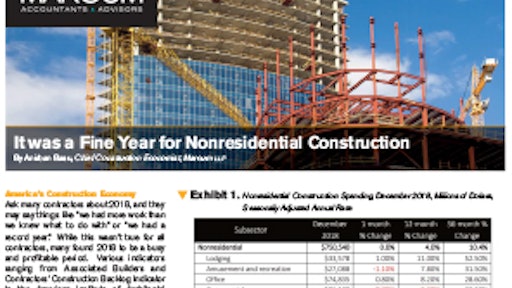 Against the backdrop of record continued strength in the U.S. economy, nonresidential construction ended 2018 up 4.0% year-over-year for the month of December, while employment in the sector grew 2.6%, reports the Marcum Commercial Construction Index for the fourth quarter of last year. The index is produced by Marcum’s National Construction Services group. The fourth quarter report was delayed by the month-long government shut-down that ended January 25, 2019.

Nonresidential construction spending in December totaled $750.5 million, up from $722.0 million in the final month of 2017. The lodging subsector showed particular strength, with an 11.0% gain from a year earlier.

Anirban Basu, Marcum’s chief construction economist and author of the report, observed, “These growth figures hardly sound spectacular, but must be further considered in the context of human capital supply constraints. While demand for construction services has been strong, the nonresidential construction industry’s capacity to put more construction in place has been suppressed by a dearth of available carpenters, glaziers, ironworkers, roofers, superintendents, electricians, etc. It is also conceivable that the sharp increase in construction materials prices that characterized the early months of 2018 resulted in the postponement of certain projects, translating into truncated spending later in the year.”

More remarkable than the steady performance of the industry in 2018’s final month was the extended trend line over the prior three years.  As a whole, nonresidential construction spending increased 10.4% between December 2015 and December 2018, with nine subsectors registering double-digit growth and an additional three subsectors also showing gains. Lodging was again the big winner, with an increase of 52.5% for the 36-month period. Manufacturing sustained the biggest loss, at 14.2%.

Employment in nonresidential building increased year-over-year to 825,000 jobs in December 2018 from 804,400 jobs in the last month of 2017. Of the 20 largest metropolitan areas in the U.S., the Phoenix-Mesa-Scottsdale, Arizona, and Dallas-Ft. Worth-Arlington, Texas, regions gained the most in construction employment for the month as compared to a year earlier (13.7% and 10.5%, respectively).

In another important measurement of growth, construction added 88,000 new job openings in December, representing 44% of the 198,000 net new job openings associated with private employers for the month. From January 2018 to January 2019 construction firms added 338,000 jobs to their payrolls in anticipation of ongoing demand, Basu wrote. “This pace of job growth is simply astonishing given how difficult it has been to fill available jobs,” he said.

Though 2019 looks poised to be a good year for contractors, Basu points to a handful of ominous indicators in the report. These include:

On the brighter side, he writes, “There are also outcomes that could serve to further strengthen economic performance and extend the current expansion. Among these is a trade deal with China; the cessation of tariffs on steel, aluminum, and softwood lumber (which would be deflationary or disinflationary and would help keep interest rates low); a federal infrastructure package; and further indications that the Federal Reserve is in fact on the sidelines for now.”

Marcum’s national construction leader, Joseph Natarelli, said, “Not only do backlog indicators show that it was a great year, but they also point towards continued volume in the year to come. In December alone, new construction jobs were nearly half of the total jobs created in the country. Based on the momentum of 2018, I think that labor and staffing will continue to be at or near the top of the challenges successful construction contractors will face in the coming months.”