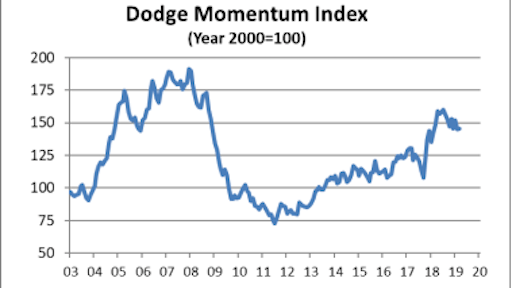 The Dodge Momentum Index increased 0.5% in March to 145.5 (2000=100) from the revised February reading of 144.8. The Momentum Index, issued by Dodge Data & Analytics, is a monthly measure of the first (or initial) report for nonresidential building projects in planning, which have been shown to lead construction spending for nonresidential buildings by a full year. The March uptick was due to a 2.8% increase in the commercial component of the Momentum Index, while the institutional component fell 3.0%.

The overall Momentum Index has essentially moved sideways and stayed within a very narrow band of activity since the fall of last year. This is highly indicative of where building markets currently are at this late stage of the construction cycle. While economic growth is expected to ease from 2018’s strong pace, relatively healthy real estate markets fundamentals and continued support for public projects such as a schools and transportation terminals should enable planning activity to remain close to recent levels for the near term.

In March, six projects each with a value of $100 million or more entered planning. The leading commercial project was the $100 million Piazza at Tysons office complex in Tysons VA. The leading institutional projects were a $300 million neuroscience research building at Washington University in St. Louis MO and the $153 million Novant Health Medical building in Charlotte NC.