Growth in North America and Europe drove solid sales, earnings and delivery improvements, building on a 15% increase in the first part of the year 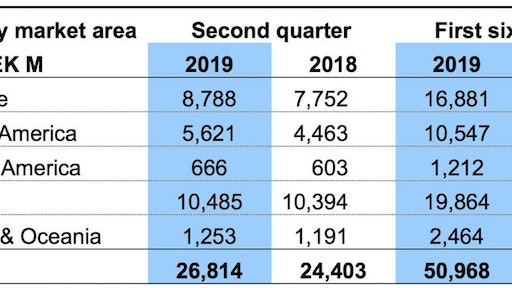 Volvo Construction Equipment (Volvo CE) saw another strong showing in the second quarter of 2019, following on the heels of a 15% increase reported in Q1 2019. Improvements in the key European and North American markets, coupled with a strong focus on its service business, volume flexibility in the industrial system and tight cost control, helped generate a net sales increase in Q2 of 10%, amounting to SEK 26,814 M (SEK 24,403 M in Q2 2018). Operating income also continued its upwards trajectory at 4,153 M in the period, up from 3,675 M in the same period the year before, equating to an operating margin of 15.5% (15.1%).

The second quarter 2019 saw order intake increase by 6%, with SDLG-branded products increasing by 28%. Order intake was particularly strong in China, rising 21% and driven by strong demand for SDLG-branded excavators and wheel loaders. Deliveries were up 12% in the period, again driven by growth in China and stable demand in Europe and North America.

The second quarter of 2019 saw increases in Europe and North America, with a small decline in Asia (excluding China). In the period up to May, demand for construction equipment saw:

“Volvo CE continued on the path of increased sales and improved profitability in the second quarter,” commented Melker Jernberg, president of Volvo CE. “Volume flexibility in the industrial system and tight cost control will continue to be in focus in the second half of the year.”