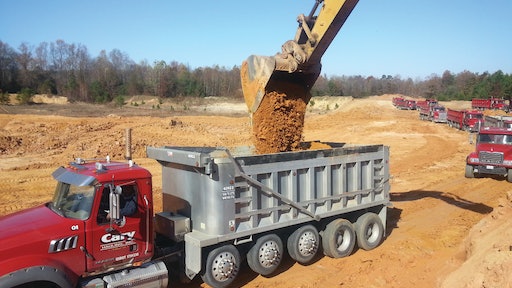 Since D.W. Cary Hauling, Inc. was founded in 1984, owner Darryl Cary has built his company and reputation from one truck and a dream for something much bigger by following a simple rule: deliver what you promise.

“I learned that lesson early on. When I started, I only hauled for local contractors. Four months after I bought my first truck, I was brokering subs. I was trying to manage 10 to 15 drivers while getting them to have the same respect for the customer — do what you promise and be there on time,” Cary explains.

Thirty years later, Cary has the largest Mack fleet in central Virginia with more than 50 trucks. Over the past winter, D.W. Cary Hauling moved more than 50,000 tons of road salt for several municipalities. Another recent challenging project was the Children’s Hospital of Richmond at Virginia Commonwealth University. The hospital is building a $168 million pavilion for pediatric services in the heart of the city, on top of a large underground parking deck. This project required D.W. Cary to remove 100,000 cu. yds. of dirt from a 56-ft.-deep hole.

“We used subcontractors to help us,” Cary says. “Some were having a lot of problems coming out of the hole. They would choke out, but not Mack.” It was clear that having the right torque, transmission and rear axles made the job much easier.

The Right Truck for the Job

Cary favors the fuel economy of the new trucks. “They average more than 6.5 mpg and that’s good for the application,” he says. But more than that, the Granite models promote his reputation for delivering what he promises. “I’m very strict about being in the right place at the right time. I tell applicants that during my hiring process so they understand. The Macks are always ready to work, and I want to make sure they are, too.”