The optional package includes cosmetic detailing throughout the length of the trailer, topped off with special 75th anniversary decals 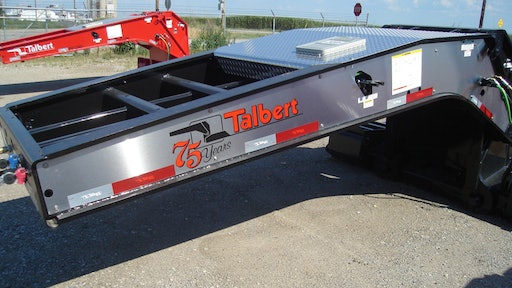 The basic anniversary package includes cosmetic detailing throughout the length of the trailer, topped off with special Talbert 75th anniversary decals.

Talbert Manufacturing, a leader in the specialty-built trailer and transport system industry, is offering a special 75th Anniversary Trailer Package for a limited time. Talbert is commemorating its milestone 75th year in business in 2013. To celebrate, the company is offering an optional, distinctive anniversary package on select 2013 models.

Greg Smith, VP of sales and marketing, says the anniversary option marks an important event for the company. “Not many trailer companies have been in business for 75 years, and fewer yet can say they have had customers with them for the majority of those years,” he said. “This 75th anniversary commemorative trailer has significant meaning for our company and the entire Talbert team. We want to share this celebration with our dealers and customers who have spent so many years as our partners, as well as those new to Talbert.”

A limited number of the anniversary edition trailers are available on Talbert’s 55-ton series trailers, specifically the 55CC, 55SA, 55SA-RC and 55SA-HX models.

Beyond the basic package, customers can get options such as aluminum wheels, special lighting and other custom parts and accessories. Package prices will vary depending on each custom design and will be determined by each dealer.

While the trailer is designed to commemorate Talbert’s heritage and history, Smith and the rest of the Talbert team are looking ahead. “We are very proud of our history as a company, and we are excited to celebrate 75 years of success,” he said. “At the same time, we look forward to a bright future and another 75 years of manufacturing the best custom trailers on the market.”