Vermont experienced flooding and rapid runoff as the result of heavy rain and snowmelt on April 15-16 and on April 19-20. The funds will be used to pay for the repairs made to restore essential traffic and prevent additional damage in the disaster areas 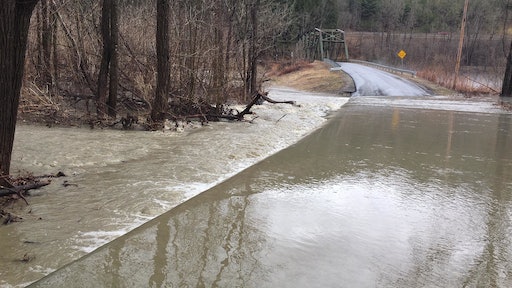 Overflow from the White River runs over a road near the village of Royalton. Roads across Vermont were closed after heavy rain and snowmelt caused flooding.
HOWARD WEISS-TISMAN / VPR

U.S. Transportation Secretary Elaine L. Chao today announced the immediate availability of $500,000 in “quick release” Emergency Relief (ER) funds from the Federal Highway Administration (FHWA) to help repair flood-damaged roads throughout Vermont. The funds were approved shortly after being requested by the Vermont Agency of Transportation.

Vermont experienced flooding and rapid runoff as the result of heavy rain and snowmelt on April 15-16 and on April 19-20. The damage was experienced throughout the state in the following counties: Windham, Bennington, Windsor, Rutland, Orange, Washington, Caledonia and Essex.

The $500,000 will be used to pay for the repairs made to restore essential traffic and prevent additional damage in the disaster areas.

Damage assessments from this event are still underway for other federal-aid highways in the region that were damaged by the severe weathers event in April. This initial “quick release” will pay for short-term repairs while the state continues to assess long-term repairs, expected at more than $2 million. The FHWA’s ER program provides funding for highways damaged by natural disasters or catastrophic events.