Innovative Bridges Across the World 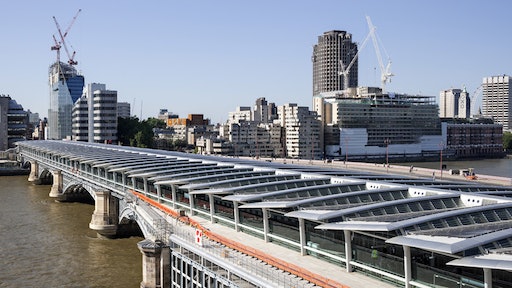 The 922-foot bridge was updated in 2012 to add a 4,400 solar panel roof which could generate 900,000 kilowatt hours of electricity annually and reduce over 500 tonnes of carbon dioxide each hear.

Here in the United States we know all too well about the sad state of many of our bridges across the country. They're crumbling, they are deficient and they are old. That's not to say old can't last. But as we start to work toward rebuilding our deficient bridges it's worth a look at some of the high tech bridges that have been built around the world and where bridge design and construction is likely heading.

An infographic created by the New Jersey Institute of Technology's Masters in Civil Engineering Online degree program highlights 12 of the most innovative bridges around the world. Not all of these are brand, spanking new, but the innovation used to create and build the bridges is clearly helping to "improve the functionality, safety and aesthetics of bridges today and into the future," according to the New Jersey Institute of Technology.

Construction of the Golden Gate Bridge started January 5, 1933, and was completed in 1937. Safety was important during construction, and workers were required to wear hard hats — making this the first construction site in America requiring hard hats. Chief Engineer Joseph B. Strauss also required a safety net be installed under the floor of the bridge from end to end, which helped save the lives of 19 men. Other safety measures included glare-free goggles, special hand and face cream to protect against wind, and special diets to help fight dizziness.

The 1.7-mile bridge has two main towers that support the two main cables. The cables are secured at either end in giant anchorages. The cable was laid by spinning the wire using a loom-type shuttle that moved back and forth as it laid the wire in place to form the cables. The spinning of the main cable wires took 6 months and 9 days to complete.

In addition the bridge has 250 pairs of vertical suspender ropes. The ropes were placed between 1972 and 1976. The original bridge and roadways used a total of 389,000 cubic yards of concrete and 83,000 tons of structural steel.

Designed as the world's largest bridge-tunnel complex and chosen as one of the Seven Engineering Wonders of the Modern World in 1965, the Chesapeake Bay Bridge-Tunnel is one of the few structures that can be seen from space. This 17.6-mile bridge took 42 months to complete and opened in 1964. The bridge crosses over and under water where the Chesapeake Bay meets the Atlantic Ocean.

A parallel crossing was completed in 1999 to help meet future traffic demands and provide a safer crossing for travelers.

The bridge was named one of Travel Channel's World's Top 10 Bridges.

Opened in 2003 and serving as the northern entrance to and exit from Boston, this bridge is one of the widest cable-stayed bridge in the world at 183 feet. The bridge is 1,457 feet long. The bridge was part of Boston's Big Dig project. The Travel Channel also named the Boston bridge one of its World's Top 10 Bridges.

The Bunker Hill Bridge was designed as the first hybrid cable-stay bridge in the United States using a combination of steel and concrete. The main span of the bridge is framed with steel girders and beams while the north and south side spans were cast in place with post-tensioned concrete.

The roadway is supported by 116 cable stays with 24 cable stays on each side span from the median to the tops of the towers. Four sets of 17 cables on the main span are strung from the sides of the roadway to the spires.

The bridge was built to withstand winds of over 400 miles per hour and and up to a 7.9 magnitude earthquake.

The bridge was opened to pedestrians in May 2002  but not officially opened to traffic until 2003.

The Blackfriars Bridge is one of only two solar bridges in existence today. The 922-foot bridge was updated in 2012 to add a 4,400 solar panel roof which could generate 900,000 kilowatt hours of electricity annually and reduce over 500 tonnes of carbon dioxide each hear. The Blackfriars Bridge is the first bridge over the River Thames since the London Bridge to generate its own power.

The Millau Bridge is the tallest bridge in the world standing 890 feet over the Tarn River and more than 1,125 feet high at the top of its highest mast. The 8,071-foot-long bridge was completed in 2004.

The bridge required about 127,000 cubic meters of concrete, 19,000 tonnes of steel to reinforce the concrete and 5,000 tonnes of pre-stressed steel for the cables and shrouds.

Still under construction, this bridge will be the longest arch bridge at 2,188 feet. The bridge will have 12 traffic lanes and a two-way train track.

Opened to traffic in 2000, the Bang Na is the longest road bridge in existence today. It features 33.5 miles of six lane, elevated expressway built with 63.5 million cubic feet of concrete.

The $1 billion bridge was built through the design-build method and represents the largest precasting operation ever carried out, according to The National academies of Science, Engineering and Medicine. The entire superstructure is precast, pre-stressed concrete.

While it might not be the tallest bridge, the Sidu River Bridge is the highest bridge in the world reaching 1,640 feet above the Sidu River valley. The 4,009-foot-long bridge opened in 2009. A rocket was used to string the first pilot line across the long gap over the river valley.

Construction began in 1989 with the total cost being approximately $100 million. The bridge consists of 71 different sections with the largest weighing 101 tons.

Holding the title of longest bridge in the world, the 102-mile-long bridge opened in 2011 as a viaduct along the Beijing-Shanghai High-Speed Railway. Because the bridge is so long designers had to account for the curvature of the earth.

The bridge took four years and 10,000 people to build. It is supported by 9,500 concrete pilings and consists of over 450,000 tons of steel structure. The bridge is said to be able to withstand typhoons, magnitude 8 earthquakes and impact from a 300,000-ton vessel.

Opened in 2005, the 22-mile Hangzhou is the longest trans-oceanic bridge. It features a six-lane, two-direction highway with a 100-year service guaranteed cable-stayed design.

The bridge is built in a complicated sea environment with one of the three biggest tides on Earth, typhoons and difficult sea soil.

Prep work for the bridge started back in 1994. Construction didn't begin until 2003.

Completed in 1998 and currently the longest suspension bridge in the world, the 2.5-mile-long bridge was designed to withstand high winds and earthquakes. The towers stand 92 stories tall (almost the height of the Eiffel Tower).

The bridge was designed to resist strong winds and earthquakes. During construction, a 7.2 magnitude earthquake occurred. The foundations of the bridge were moved with the bearing ground so the span lengths had to be changed.

The bridge was named number two on the Travel Channel's list of World's Top 10 Bridges.

The Kuripla Bridge was the first solar bridge and opened in 2009. Longer than the Blackfriars Bridge, the Kuripla is a 1,540-foot-long pedenstrian and bicycle bridge.

The bridge is a multiple0mast, cable-stay structure based on principles that produce a synergy between balanced tension and compression components to create a light structure that is still incredibly strong. The bridge incorporates 550 tons of structural steel and 4.2 miles of helical strand cable.

The bridge is lit with an LED lighting system which can be programmed to produce and array of different lighting effects with 75% to 100% of the power provided by solar energy.

While all these bridges have incorporated innovative features during their time of construction, the future of bridges continues to evolve. Some future innovations we are starting to see are bridges reacting to the weather, like the Tullhus Bridge in Sweden. The Tullhus is heated with a built-in hot air system to keep snow off the bridge during winter. In addition to reacting to weather, bridge architects and designers must take into account increasingly extreme weather patterns and natural disasters such as earthquakes.

Future bridge designs are also looking into incorporating green and sustainable features such as green space for gardens and indigenous plants.

What do you think future bridges will look like?

Tunnel Construction: Then and Now