Tunnel Construction: Then and Now 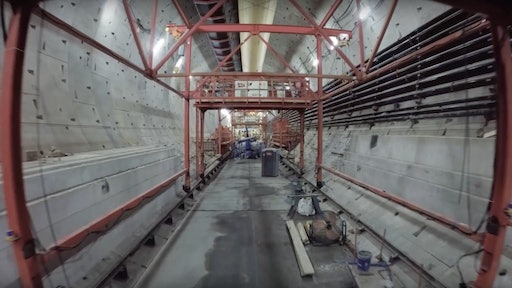 Drone's-eye-view inside the Alaksan Way Viaduct tunneling project, which is being dug by gigantic boring machine known as Bertha.

Just like a recent Construction Toolbox blog highlighted some of the most innovative bridges across the world, tunnel construction in the United States has also been evolving.

According to a recent tunnel construction infographic from the New Jersey Institute of Technology there are over 400 tunnels in the United States. While records of tunnel construction methods date all the way back to 1556, construction of tunnels has been evolving as our world demands new, innovative and sustainable structures.

Long ago tunnels were dug with a hammer and chisel. That was replaced by steam and compressed air powered drills and then dynamite for blasting. In 1884, British engineer James Greathead perfected the tunneling shield method which is still used today in soft ground tunneling. In 1900, the method of using circulating coolant through pipes embedded at intervals throughout the area was used to stabilize soft soil, and it is a method still used today.

Using shotcrete to line tunnels came about in the 1920s. In 1954, James Robbins invented the tunnel boring machine. Between 1957 and 1965, Austrian tunneling specialists developed the New Austrian Tunneling Method. And in 1970, construction of tunnels began to incorporate injecting grout into soft soil or fractured rock surround the tunnel route — another method still used today.

One of the more recent tunnel projects — The Big Dig in Boston — provides more insight into modern-day construction of tunnels.

Special excavating equipment called "clamshell excavators" carved narrow trenches — about 3 feet wide and up to 120 feet deep — down to bedrock. Then, side-by-side concrete and steel panels formed the walls of the tunnel while workers removed more than three miles of dirt beneath the city of Boston.

Another modern-day tunnel project — Seattle's Alaskan Way Viaduct — is using the bored tunnel method with it's gigantic boring machine known as Bertha. This tunnel project has encountered many delays and issues but after nearly two years of Bertha being out of commission for unexpected repairs it seems this project is finally back to work.

Share your thoughts on tunnel construction in the comments section below.

Innovative Bridges Across the World

May 9, 2016
Latest in Construction Toolbox