5 Major US Transportation Projects Opening in 2017 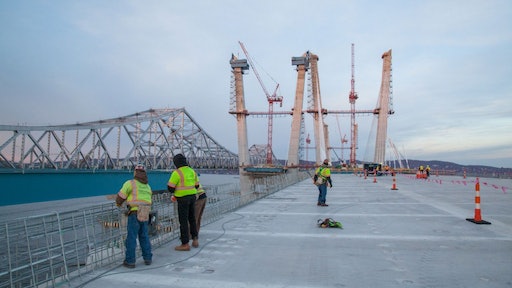 Construction work on the new Tappan Zee Bridge in New York in December 2016.

What will happen to infrastructure spending in 2017 is still a bit of a mystery. However, there are some major U.S. infrastructure projects slated to complete construction and/or open this year. In fact, there are a few major transportation projects to keep an eye on in 2017.

The Second Avenue Subway phase one construction is complete, allowing this transportation project to actually open to the public in 2017. This will be New York City's Metropolitan Transportation Authority's (MTA) first major expansion project in 50 years. The Second Avenue Subway was first discussed back in the 1910s but delayed after the Great Depression struck. With a lack of post-war funding, construction didn't start until 1972 but was again stopped in 1975 thanks to another fiscal crisis.

According to the MTA, "The Second Avenue Subway reduces overcrowding and delays on the Lexington Avenue line, improving travel for both city and suburban commuters, and provides better access to mass transit for residents of the far East Side of Manhattan."

Work did restart 32 years later in 2007. At that point, the MTA promised the project's first phase would be open by 2017, and that deadline was met when phase one of the project opened for service on January 1, 2017. Phase two of the Second Avenue Subway project is scheduled to begin possibly in 2019.

When complete, the full-length subway line will extend service 8.5 miles along Manhattan's East Side, offer 16 new stations and easy transfers to other subway lines.

Phase one of the project will help decrease crowding on the Lexington Avenue Line by as much as 13% (23,500 fewer riders) on an average weekday. It will also help reduce travel time by 10 mixtures or more from many riders traveling from the Upper East Side, according to the MTA.

The New Tappan Zee Bridge crossing the Hudson River in New York is currently one of the largest public infrastructure projects under construction in the United States, according to Curbed. Construction on the 3.1-mile bridge began in 2013. The new bridge will have eight traffic lanes, four breakdown and emergency lanes, space for express buses, a bicycle path and a pedestrian path with viewing areas.

According to the New York State Thruway Authority, plans for the bridge were first discussed in 1999. During the next 10 years 430 meetings were held and 150 concepts were considered, but the project did not move forward until 2011 when a new design-build legislation was enacted, a fast tracked federal environmental review and concurrent procurement processes were completed, a project labor agreement with construction unions was negotiated and then construction activities started.

The New York State Thruway Authority says, "The new bridge will be a visually striking, recognizable landmark and one of the widest cable-stayed structures of its kind in the world."

The bridge will incorporate 14 miles of span cables, 50 miles of foundation pilings, 300,000 cubic yards of concrete and 220 million pounds of U.S. steel.

Two spans of the new bridge are expected to open to traffic this summer, but the other four-lane span isn't scheduled to open until 2018.

More than 6,300 people have worked on the project, which is still set to remain within the $3.98 billion budget.

Across the country, another major project is set to open in 2017 — the Bay Area Rapid Transit authority's Richmand-Fremont line (known as the BART expansion). This project was originally scheduled to open in 2014 but is now expected to open in 2017.

The Warm Springs extension portion of the project will add 5.4 miles of new tracks from the existing Fremont Station south to a new station in the City of Fremont.

Detroit's QLINE streetcar is scheduled to open this spring. The QLINE will run 3.3 miles and connect the downtown Detroit People Mover to the railway station in New Center. The line will include 20 stations serving 12 stops. According to Wikipedia. approximately 60% of the line will not be equipped with overhead electrical wires, and those streetcars will be powered solely from lithium-ion batteries.

Charlotte, NC, is also in the midst of a light rail expansion. The Blue Line Extension is an extension of the LYNX Blue Line light rail service that is currently under construction and is expected to open in August this year. The 9.3-mile addition will add 11 stations, four park and ride facilities and will nearly double the size of the one-line light rail system, according to Curbed.

Construction on the extension began in 2013 when work began on shifting underground utilities, building retaining walls, and grading and drainage work. The city decided to divide the extension into three segments divided between three contractors. In 2014, the joint venture of Balfour Beatty Infrastructure and Blythe Development Co. won a civil construction contract to work on the first segment of the extension project. Work included improving drainage, building bridges, maintaining retaining walls, controlling traffic, and moving water and sewer mains.

Lane Construction was awarded a contract for the line from Old Concord Road to UNC Charlotte. Finally, Balfour Beatty was awarded a separate contract to lay rails and install the power stations and overhead catenary wires.

By the end of 2015, most of the tracks had been laid and foundations for two stations had been completed. The project is expected to open in August 2017.

Have we missed any other major transportation projects set to open this year?

What about major projects scheduled to start this year?

What major transportation projects are you interested in or keeping an eye on?