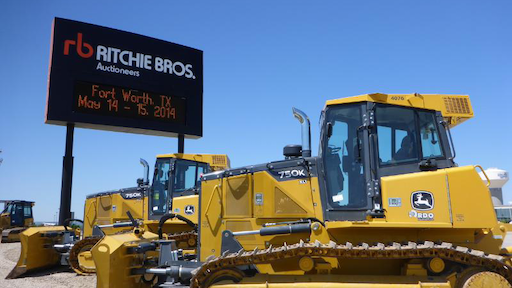 Ritchie Bros. Auctioneers, a global industrial auctioneer, will conduct a two-day unreserved public auction at its Fort Worth, TX, permanent auction site on May 14 to 15, 2014. More than 2,150 heavy equipment items and trucks are featured in the auction, with every item to be sold to the highest bidder regardless of price — without minimum bids or reserve prices. Bidders can participate in the Fort Worth auction in-person, online in real time at www.rbauction.com and by proxy.

"We have a lot of late model John Deere and Caterpillar construction equipment for sale — more than I have ever seen in my time with the company — at the upcoming May auction here in Fort Worth," said Adam Kawulok, Regional Sales Manager, Ritchie Bros. Auctioneers. "If time is of the essence, there is no better place to find equipment that is ready to be put to work."

Specific equipment highlights from the Fort Worth auction include:

For more information, including how to register and bid, visit rbauction.com. Interested buyers can come to the auction site to inspect, test and compare items ahead of the auction.

Get a fuel-efficient Volvo excavator now through the end of August with rates as low as 0% for 24 months on our 2018 or newer models.
June 24, 2020
Latest