Laying It on the Line 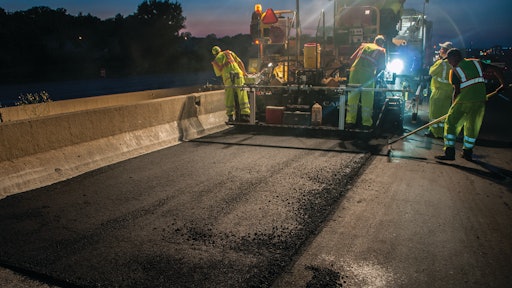 The total job required 75,000 tons of E10 Superpave HMA to be laid 3 ½ inches thick and compacted to 92 percent. Paving widths varied from 12 to 16 feet depending on whether it was lane, shoulder or places where lanes merged.

Taking on a 5-mile long asphalt overlay job for a stretch of divided interstate highway may not seem out of the ordinary. But Payne & Dolan Project Manager Sam Bilhorn said the high degree of scrutiny for his most recent project due to its location made it a big project for them.

The stretch was in Madison, WI, which is not just the state capital but also a major waypoint on the east-west conduit between the Great Lakes Region to all intermountain points to the west. This bit of the United States’ northern-most interstate highway system carries the combined traffic flow of I-90, I-94, and I-39. It also bears feeder traffic from intersecting local state highways 51, 151, 12 and 18.

Summer in Madison combines the best construction climate with peak tourist traffic on the way to Milwaukee, Chicago and popular Wisconsin vacation spots. Closing down traffic lanes for repair during daylight hours in July would create a choke point. Therefore, the Wisconsin Department of Transportation limited any lane closures to the hours of 9 p.m. to 5 a.m. And no work was allowed to take place Friday or Saturday nights.

These time restrictions put equipment reliability at a premium, and the road’s heavy traffic called for a paver that would consistently lay quality asphalt. Because of these needs, Payne & Dolan turned to Atlas Copco for the answer.

Roni LaMarche, who is paving supervisor for Payne & Dolan, asked Bill Nittinger, the Atlas Copco regional sales manager, to acquire one of the line’s new Dynapac Interim Tier 4 F1000W wheeled pavers. Delivery of the rig, configuration and a demo/rental agreement were coordinated through Matt Sullivan of Brooks Tractor of nearby Sun Prairie, WI. Brooks Tractor is the authorized Atlas Copco Road Construction Equipment distributor for the region and provides customer service backed by Atlas Copco training and support.

Payne & Dolan had the F1000W configured with a Carlson EZIV Screed. Mounted behind the screed was an infrared temperature beam to measure temperature pattern and a Topcon leveling system combined with averaging beam

No segregation, no "skunk tail"

One thing that drew LaMarche to the F1000W is the outboard drive auger system. There is no center chain drive box in the Dynapac F1000W auger system. The mix along the full length of the augers remains consistently homogenous without a need for a kickback auger or deflection plates. Without a place for segregation to collect and asphalt to cool, there is no blemish in the pavement that crews refer to as “skunk tail.”

The consistency was evident at this job. The total job required 75,000 tons of E10 Superpave HMA to be laid 3 ½ inches thick and compacted to 92 percent. Paving widths varied from 12 to 16 feet depending on whether it was lane, shoulder or places where lanes merged.

Paving was generally performed with two pavers working in tandem, but on this night only shoulder work was being done with the other paver on standby. Since work this night required only one lane to be shut down, maintaining weekday, nighttime traffic flow, the contract allowed Payne & Dolan to begin an hour earlier.

Twenty trucks fed the material transfer vehicle a steady supply of HMA from one of Payne & Dolan’s plants just four miles away, so cooling was not an issue. The operator’s display showed 196 degrees Fahrenheit engine temperature and indicated the paver’s 98-gallon tank was full, enough to keep them paving 24 hours – more than enough for this night’s shift. Large numerals on the display showed the paver to be moving along at a leisurely walking pace under the steady supervision of paver operator Dan “Boo” Swanke.

The lute men had little to do other than tidy up excess at the initial transverse joint to start the night, and the joints  to stop and start at a bridge before the final joint of the evening. There was no streaking or tearing of the mat anywhere

Payne & Dolan appreciated the paver's low noise levels. Paving crew foreman Jake Webb said: “You can practically whisper to the other guy on the back of the paver and he’ll hear you.”

Another plus to the F1000W is its increased operator visibility. “You know, with these new Tier 4 requirements, rigs need extra air volume for the technology. On others the hoods are so big you can’t see anything. They practically block the view of the hopper. But not the Dynapac. The operator can see all around him, the hopper, the auger, his screed men,” Webb said.

Webb appreciated the auger extension design. “Basically, to set up for a 12-foot section with a 5-foot shoulder, you’ll want to add the 32-inch extension. Other manufacturer’s auger extensions are bolted through the shaft. The bolt threads get all gummed up with asphalt. On the Dynapac all you do is remove three bolts and a set screw, slip it off or push it on. Matching male and female splines on the shaft stay clean and make it easy.”

Then there’s the front wheel assist. “Not all pavers have that,” Webb said. “But just a week or so ago we were doing a paving job on a hill in loose, fluffy stuff, pushing the mix truck. A lot of pavers would get stuck.” Webb pointed out that the Dynapac has front wheel assist. The rear two of the four steering wheels are hydraulically powered and can be activated on the fly by a switch to increase traction. “We did that whole two-mile stretch of hill in 10 hours.”

Webb said his crew has been spoiled by the F1000W paver. “Just the other night we were on one of our other 8-foot rigs. The whole night we were all saying how we wished we were back on the Dynapac.”

The contract provided Payne & Dolan a 90-day window to complete the overlay, which in places was up to seven lanes wide. Wet weather had caused delays in the beginning, but once the forecast cleared up, the crew paved the way to finishing on schedule.

The Interim Tier 4 model of the F1000 has an upgraded Cummins QSB 6.7 liter engine that delivers 220 hp at 2,000 rpm or 230 hp at 1800 rpm. In this design Dynapac adjusted the paver’s duty cycle so that regeneration of the Diesel Particulate Filter (DPF) system occurs without disturbing the paving operation in most conditions. Other technology helping it to exceed EPA requirements are a direct flow air cleaner with new exhaust gas recirculation (EGR) and diesel oxidation catalyst (DOC) systems.

The direct flow air cleaner is positioned for optimum airflow and serviceability. The DPF is also ideally positioned so that it can easily be removed for regular maintenance once every 5,000 hours.

The F1000 is also engineered with a multi-function display-based calibration so there is no need for a laptop.

The F1000 paver’s platform height is 78 inches with a deck height of 63 inches - the lowest deck height in the industry. This means all-around uninterrupted visibility and a low center of gravity that helps balance the paver and screed to ensure accurate edge geometry and the best mat quality.