A Time Machine for your Construction Jobsite?

A new artificial intelligence 3D capture tool aims to reduce the cost, time and pain it takes to build through more efficient capture and analysis of construction jobsites 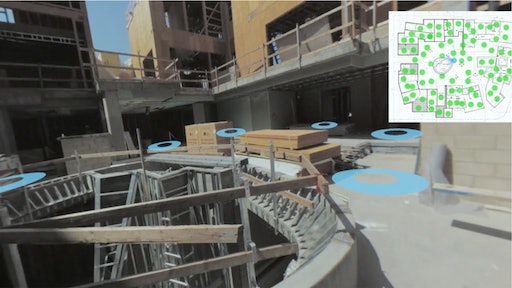 A time machine for your construction jobsite? That's what OpenSpace's creators like to refer to it as — a "360-degree visual time machine, allowing your team to visit a particular place at the job, at any moment in time."

What is OpenSpace? It is a 3D capture tool and program designed to help construction contractors capture and track progress on a project using artificial intelligence (AI).

What makes OpenSpace different from other 3D capture tools? According to the website, OpenSpace is 100% labor free — meaning it does not require dedicated setup and capture time. OpenSpace users attach a 360-degree camera to the top of their hardhat (kind of like a GoPro). As the user walks through the jobsite, the proprietary AI algorithm captures and interprets the data.

According to the OpenSpace website, the program's AI "transforms the raw video data into a complete, easy-to-navigate Google Streetview style map of your site, with no effort on your part."

Contractors then have an interactive 360-degree map of the site in which they can zoom and explore any point of the project and see progress as it happened.

OpenSpace is a pretty new tool for contractors. In fact, at the time of writing this blog, pricing for OpenSpace hadn't even been released to the public yet.

With the continuing emergence of technology in the construction industry, it's no surprise a tool like this has entered the scene. And it sounds pretty good. But just because the OpenSpace program does the video and data recording for you doesn't mean it's completely hands off.

Yes, you no longer have to send a worker out to a jobsite to take time-consuming jobsite photos. And yes, a 360-degree camera should be able to capture more details and the entire view of a jobsite that a regular camera may not. But you do still have to have an actual human wearing the camera and walking the site. That means whoever is responsible for this job needs to know where he or she needs to be walking and what he or she needs to look at. They need to make sure they don't miss any spot on the jobsite.

That may seem simple, but think about how you are when you go for a walk. In the beginning, you may be attentive and looking closely at all your surroundings. But as the walk goes on your mind starts to drift, you get distracted, you forget to look one way or make a turn. While a 360-degree camera should help eliminate some of these problems, it's still important to make sure the camera-wearer stays attentive to his or her job, especially if it's something they have to do often. If you had to walk the same exact path every few days you'd probably start to be less attentive going the same route over and over. Still, it does seem nicer to not have to stop every few feet and take pictures from multiple angles.

OpenSpace is not the only 3D capture tool out on the market. There are several other options including other 3D capture service companies, using a fixed security camera and even mobile apps.

Have you used 3D capture on your construction sites? If so, what are your thoughts? Successful? Useful? Time-consuming?

If you haven't used 3D capture before, would you consider it?

What do you think of the idea of using a 360-degree camera on a hardhat to capture the jobsite?

Please share your thoughts and comments with ForConstructionPros.com. We want to hear what our readers think of this new method and technology.