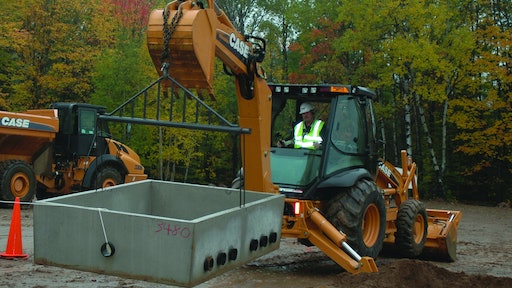 Case redesigned the N Series backhoe loaders for what the company calls class-leading power and efficiency.

Burr Ridge, Ill. — CNH Global, parent to the Case and New Holland brands, announced financial results for 2010 showing net sales increased 13% (11% on a constant currency basis) to $14.5 billion on the back of improving demand for ag and construction equipment in the Americas and Rest of World markets.

Net sales were 80% agricultural equipment and 20% construction equipment for the year. Geographical distribution of revenue for the period was 41% North America, 23% Western Europe, 19% Latin America, and 17% Rest of World markets.

Equipment Operations generated $1.8 billion in cash flows from operations for the year including a $323 million reduction of net inventory. Year-to-date capital expenditures totaled $301 million, a 39% increase from the comparable period largely as a result of new product launches; 80% of the full-year capital spend was on new products and production capacity. CNH's Equipment Operations ended the period with a net cash position of $2.2 billion. The effective tax rate for 2010 was 19%, which was favorably impacted by the settlement of certain tax items in the fourth quarter and certain valuation allowances. The Group expects to return to a more normalized effective tax rate of 36% to 40% in 2011.

CNH anticipates that in 2011 the global agricultural markets will be flat to up 5% in tractors and up 5 to 10% in combines. In the global construction equipment market CNH's outlook for 2011 is for an increase of between 8 to 12% in light equipment and 5 to 10% in heavy equipment.

CNH expects to outperform the market in unit growth as a result of new product launches, geographic footprint diversification, and heavy equipment bias in the agricultural sector resulting in an increased operating profit and margin from volume and industrial leverage.

Revenues are expected to be up by as much as 10% compared to the full year 2010.

Operating margin is expected to be between 7.1% and 7.9% consistent with the company's strategic business plan.

Full year 2010, net sales in the construction equipment sector grew 39% (35% on a constant currency basis) as a result of significant market improvements in the Latin American and Asian markets, and from the improvement in conditions in the North American market largely as a result of aging fleet replacements. Operating profit for the year improved by $285 million to $(54) million due to increased production, wholesale unit increases (+50%), and reduced costs from prior period restructuring initiatives. In an improved sales environment, net inventory was reduced by 29% as a result of a focused effort to improve the aging profile of the company and dealers’ inventories in preparation for product launches initiated in Q4, which continue through 2011. During the period, primarily Q4, significant new product launch costs were incurred as several important product lines were re-tooled for the launch of new products into our dealer network.

Full-year construction equipment market share was flat to prior year across all segments with the exception of Latin America, which was down due to industrial capacity constraints in both the heavy and light segments. Capacity expansion plans have been initiated for two facilities to accommodate future market growth and in order to meet manufacturing localization targets.

Company and dealer inventories ended either in line with or below industry levels for the year. Worldwide production lagged retailed units by 13% to allow for de-stocking initiatives to be completed, and as a result of product launch related capacity losses. The group expects production units to increase across the group's industrial footprint in 2011 under current market demand estimates.