Terex 2010 Net Loss Reduced by Half

Westport, CT, -- Terex Corporation (NYSE: TEX) today announced net income attributable to the company for the full year 2010 of $358.5 million, or $3.30 per share, reflecting improved operating results versus 2009 and the gain associated with the previously disclosed divestiture of the mining business.

"For Terex, 2010 was clearly a transitional year as we rebounded from the trough levels of 2009 and completed the sale of our mining business," said Ron DeFeo, Terex chairman and chief executive officer. "We have seen order rates accelerate throughout 2010 for most of our businesses, including a recent sequential upturn in order rates in our cranes segment as we secured several large contracts in the fourth quarter for longer term delivery schedules. Markets in Latin America, India and China are driving large crane and off-highway truck equipment demand."

All of the company's segments increased net sales in the fourth quarter and for the year, and increased backlog has lead to increases in production across most business segments.

"Although costs associated with increased production will also rise, we anticipate net sales and our income from operations will outpace these costs on a consolidated basis," DeFeo said, noting that improved business conditions should bring higher input costs.

"The foundation of a business recovery has become visible to us, although we are in the early stages," DeFeo said. "As anticipated, we see improved demand in our early-cycle product categories of aerial work platforms and materials processing. Our construction segment is seeing positive demand from certain markets, such as Central Europe and Brazil. Additionally, we expect that new product offerings, such as our skid steer loaders, will begin to favorably impact our results as we move through 2011.

"Our cranes segment is experiencing some short-term weakness, but the mobile crane product offering has stabilized. Our port equipment business is showing increasing quotation activity; however, we still expect this business to report an operating loss in 2011," DeFeo said. "We continue to restructure this business and expect it to return to profitability in 2012. And while we expect cranes to be an improving story as we move through the year, many of our large crane orders, both in mobile cranes and port equipment, will not ship until the latter part of 2011."

"Our current outlook for net sales in 2011 is $5.0 billion to $5.4 billion, an increase of roughly 13-22% from 2010. Our expectation for Income from Operations is a profit of $220 million to $250 million. As a result, we would expect earnings per share (EPS) for 2011 to be approximately $0.60 to $0.75 per share for the year based on an average share count of approximately 118 million shares, excluding the impact of restructuring and unusual items. We expect to incur a loss of approximately $0.10 to $0.15 per share, excluding the impact of restructuring and unusual items, in the first quarter of 2011, with a return to net profitability in the second quarter. The estimated average share count includes shares that are contingently issuable upon conversion of our outstanding convertible notes and assumes an estimated volume weighted average stock price of $40 per share." 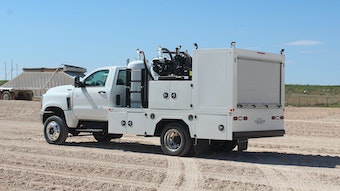