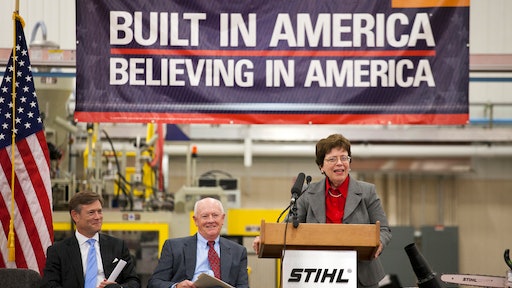 STIHL Inc. recently hosted Acting Secretary of Commerce Rebecca Blank, who announced a $40 million multi-agency competition, the Make it in America Challenge, to accelerate the trend of insourcing, where companies are bringing jobs back and making additional investments here in America.

The competition, which is being funded by the U.S. Department of Commerce’s Economic Development Administration (EDA) and National Institute of Standards and Technology Manufacturing Extension Partnership (NIST-MEP) and the U.S. Department of Labor’s Employment and Training Administration (ETA), will build upon the administration’s bottom-up approach to strengthening the economy and creating jobs by partnering with state, regional, and local economies.

Acting Secretary Blank pointed out that more and more businesses are choosing to invest, create jobs, and make things here in America, and that the new initiative was designed to promote that trend. “This administration’s top priority is creating American jobs, and through the Make it in America Challenge, we will be supporting business’ efforts to expand here at home. By making competitive investments, the Challenge will help communities across the U.S. accelerate economic growth, attract business investment, and create jobs.”

Virginia Beach-based STIHL Inc., one of several manufacturing facilities in the STIHL Group, is the headquarters for U.S. operations. The company has steadily increased its investments in America since its founding in 1974. Starting with 50 employees that assembled only one model of chain saw, today, the company employs approximately 2,100 people nationwide, with 1,900 in Virginia Beach, Va., and manufactures more than 270 model variations of chain saws and power tools for sale in the U.S. and around the world.

“While many American companies have chosen to move their operations overseas in pursuit of cheap labor, since 1974 we have chosen instead to reinvest in our technology, our workforce and our infrastructure right here in Virginia Beach. As a result, we have since become the number one selling brand of gasoline-powered handheld outdoor power equipment in America,” said Fred Whyte, president of STIHL Inc., who accompanied Acting Secretary Blank on a partial tour of the more than 2 million square feet of manufacturing facilities.

“Some people may say that American manufacturing cannot compete in the world economy. I beg to differ. American innovation, technology, and the American worker are second to none and we are proving it,” said Whyte.

HOLT CAT purchased Sullair of Houston, a fixed and portable compressed air dealer with operations in Houston, Odessa, and San Antonio, to expand its list of products and services within the growing market.
January 12, 2021
Follow Us