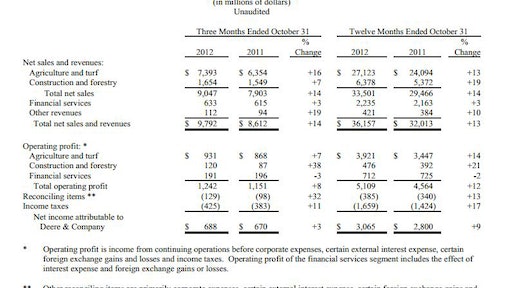 Company equipment sales are projected to increase by about 5 percent for full year 2013 and to be up about 10 percent for the first quarter compared with the same periods of 2012. For fiscal 2013, net income attributable to Deere & Company is anticipated to be about $3.2 billion.

Deere's worldwide sales of agriculture and turf equipment are forecast to increase by about 4 percent for fiscal year 2013.

Deere's worldwide sales of construction and forestry equipment are forecast to increase by about 8 percent in fiscal 2013 due in part to modest improvement in U.S. economic conditions. Sales in world forestry markets are projected to be about flat for the year as further weakness in European markets offsets stronger demand in the U.S.