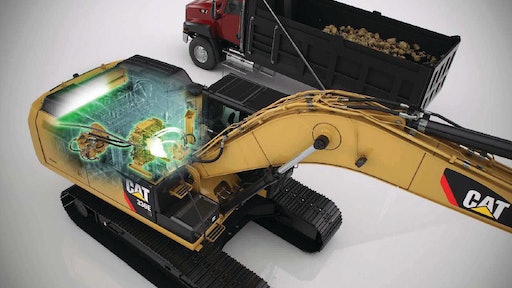 Instead of losing the kinetic energy when braking the upper structure, Caterpillar's 336E H hybrid excavator captures that energy in accumulators and re-uses it during swing acceleration.

Energy efficiency and fuel savings are two of the main trends that will be in the spotlight at bauma 2013, the International Trade Fair for Construction Machinery, Building Material Machines, Mining Machines, Construction Vehicles and Construction Equipment. New solutions to these challenges will be presented in almost all the segments at this event, which takes place from April 15 to 21, 2013, in Munich. Outlined below are just some of the fuel-saving innovations for construction machinery to be showcased at bauma.

The British construction machinery manufacturer JCB is presenting its Ecomax engines at bauma 2013. These engines meet the rigorous Stage IIB and Tier 4 Interim emissions standards without the need for diesel particle filters or emissions aftertreatment. Instead JCB is using a new patent-pending engine technology that enables clean and efficient combustion.

In addition to the environmental benefit from lower emissions, this new development gives customers improved torque across the whole range of speeds. According to the manufacturer, this significantly reduces fuel consumption. JCB is fitting the Ecomax engines to excavators, loaders (backhoe, wheel, telescope, telescopic-wheel and compact), telescopic handlers and rough terrain forklifts.

Caterpillar will be showcasing its new 336E H hybrid excavator. Instead of losing the kinetic energy when braking the upper structure, it is captured in accumulators and re-used during swing acceleration. According to Caterpillar, the benefit is a reduction in fuel consumption of approximately 25%.

Another way of saving on operating costs is offered by the 966K XE wheel loader, which will also be on display. It has been fitted with a new, stepless powertrain system designed to minimize fuel consumption.

The German manufacturer Liebherr will be presenting a hybrid solution for heavy-duty applications with its HS 8300 HD Duty Cycle Crawler Crane. Weighing in at over 350 tonnes, it is fitted with a powerful and also environmentally friendly hybrid drive on a hydraulic basis.

According to the manufacturer, the storage and subsequent reactivation of excess energy increases handling rates and significantly reduces fuel consumption. In addition, the proven technology of hydraulic energy storage is low on maintenance and reliable. This machine has hydraulic free-fall winches offering approximately 50 tonnes of line pull.

Doosan Construction Equipment has brought out two new heavy-duty excavators in the 50-tonne class, both of which meet the Stage IIIB emissions standard: the DX490LC-3 model, with an operating weight of 49 tonnes, and the DX530LC-3, with 52 tonnes.

According to the Korean manufacturer, the ratio of productivity (excavated m3/h) to fuel consumption (l/h) in standard operating mode was increased by 9% in both these models as compared to the previous models. The secret to the lower overall fuel consumption, says Doosan, lies in improved cooling, a display to inform the driver about fuel consumption and optimized main control valves, which reduce energy losses and deliver higher efficiency. In addition, extra sensors are fitted to ensure better electronic control of the pumps, engine and main control valve. As a result, throughput, pressure and torque can all be precisely adjusted to suit the individual operating requirements.

Hamm AG of Germany, part of the Wirtgen Group, is expanding its range of articulated tandem rollers. The new HD+ 70i and HD+ 80i are fitted with engine technology that already meets the EU IV / Tier 4 Final standards, which will come into force in 2014.

Two separately controlled ventilators cool the charge air, hydraulic oil and engine cooling fluid. In doing so, the load-dependent control of the ventilator for engine cooling saves fuel and reduces noise emissions. In addition the rollers are fitted as standard with the Hammtronic engine management system, which Hamm says ensures that the engine is always operated in the right loading range. This optimizes performance and minimizes consumption.