Economists have been blindsided by construction-spending drops for three consecutive months. Here's why now is the time to keep calm, carry on and add the monthly economic indicator news to your watch list 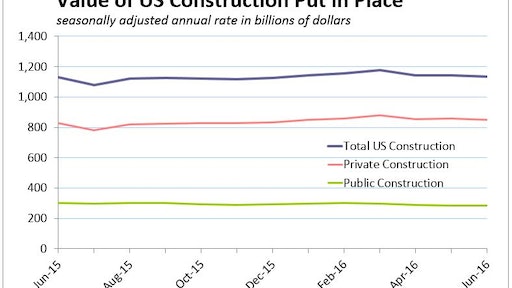 Squint just right and you can see the slippage in public and private US construction spending over the past three months.

I'm not an economist, but I've read enough analysis of construction economic indicators to have formed a couple of guidelines for responding to the numbers:

So Wells Fargo's analysis of June construction-spending estimates from the Department of Commerce got my attention by pointing out that consensus forecasts for the total value of construction spending put in place have not only missed the mark for three months in a row, but in all three months construction spending dropped while industry watchers expected growth. The clincher: "This divergence begs the question: 'Are we seeing weakness due to volatility, or are we are at a turning point and forecasters are missing the signal?'"

One of the ways I assuage monthly report panic is to average several recent monthly numbers and compare them to the same months in the previous year. For example:

But Wells Fargo raises its question because of the results of the second quarter of 2016. And there the difference between last year and this one narrows significantly:

Still no emergency. But we've just been handed the third sub-1%-growth estimate of quarterly GDP in a row. Consumer spending is one of very few bright spots in the economy overall. And we're seven years into this economic cycle.

Don't underestimate the fact that this is one of the most unique economic cycles this country has ever experienced. Recovering from the Great Recession is not likely to follow any script.

If you're not already, this is a good time to start keeping an eye on monthly economic indicators.

Is Slowdown in Building Boom a Blip or Indication of a Bigger Problem?