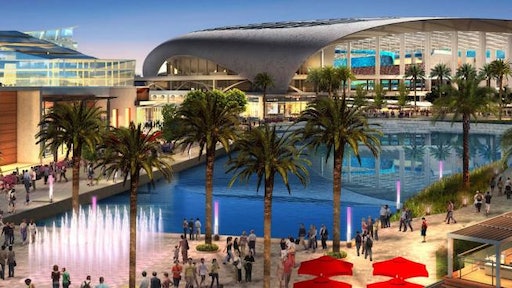 The 298-acre City of Champions Revitalization Project in Inglewood, CA, will be able to house an 80,000-seat stadium as well as a smaller indoor entertainment venue with seating for approximately 6,000 people, while reconfiguring the previously-approved Hollywood Park plan to allow for 890,000 square feet of retail, 780,000 square feet of office space, a hotel of up to 300 rooms, up to 2,500 new residential units, and approximately 25 acres of public parks, open space and pedestrian and bicycle access.

If there's one segment of construction that seems to be doing just fine in this tumultuous economy it might just be stadium and entertainment construction. There doesn't seem to be a lack of new sports stadiums and arenas being proposed or starting construction.

Of the 10 largest upcoming stadium-arena construction projects — meaning these projects are all still in the planning phase — four of them are planned in California. They include the new Rams football stadium in Inglewood, the San Diego Chargers NFL stadium in San Diego, Carson NFL stadium in Carson and the Oakland Athletics baseball stadium in Oakland.

It's not just sports stadiums taking shape. The entertainment industry is also adding large construction projects to the mix. Somewhat surprisingly, Florida will be home to four of the top 10 largest upcoming entertainment projects. Some of these have even larger project values than the stadiums in the above list.

Here is the list of the 10 largest upcoming entertainment facility construction projects: