Imagine what New York, Los Angeles, London and Cincinnati would look like today if these transportation projects had actually been built 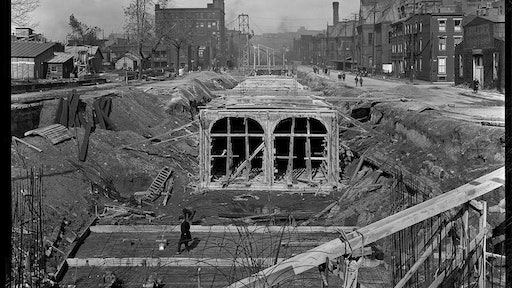 The city of Cincinnati started to build a rapid transit system in the 1920s but only completed seven miles of subway lines before the project was abandoned.

Business Insider recently published an article on five of the best unbuilt transportation projects of the 20th century. It's interesting to take a look back on these projects that almost were but never were. Had they been completed, some of our largest cities may look, and travel, a bit differently than they do today.

Perhaps the most interesting fact about these projects is that they were either subways or airports. While some of these projects never had a chance, a few were started and abandoned. It's interesting to imagine what these cities would look like now had these construction projects actually been green lighted or not shut down before completion.

Manhattan has a lot of subway lines, but Staten Island is the only New York borough that the train doesn't connect to. That's not to say no one ever tried. In 1923, the city did break ground on tunnels underneath the Verrazano-Narrows Bridge. However, after completing only 150 feet of tunnel, the project was abandoned due to lack of funding. Today, it would be too cost prohibitive to try to build the subway line out to Staten Island.

The city of Los Angeles almost had its own rapid transit system with a combination of subways and elevated trains. However, it never came to fruition. In 1925, two transportation planners did map out a rapid transit system for Los Angeles that included 140-miles of elevated rails and subways. However, voters ended up rejecting the project, which never got off the ground. Los Angele's current light rail system is only 98.5 miles, not helping the city much to relieve its horrible traffic.

Back in 1916, the city of Cincinnati made plans for nearly 16 miles of subway lines that would loop around the city. Dubbed the Rapid Transit Loop, a $6 million bond issue was proposed. The design of the rapid transit system was based on Boston's Cambridge-Dorchester line. The plan was for an underground portion of the subway to run north along the partially drained Miami and Erie Canal to the Brighton neighborhood where it would then surface through the Mill Creek valley to the suburb of Saint Bernard. Hooking east through Norwood and then south through Oakley and Evanston to the river, the transit system would then run along an elevated railway back to the downtown area. Twenty above and below ground stations were also planned.

The city did begin construction in late 1920 and completed seven miles of subway lines before the project was cancelled 10 years later due to lack of funding and an economic downturn.

Three abandoned subway lines still remain today, and according to The Verge, is the nation's largest ghost subway.

Back to Manhattan we go to envision what it would look like if an airport had been built in the middle of the city. In the 1940's, that was the plan. A $3 billion ($17.06 billion in today's dollars) airport was planned with a runway that would have stretched the whole 144 blocks of Manhattan from 24th Street to 71st Street. The project would have also included restaurants, office space, waiting rooms and piers for ships to anchor. The idea was pitched by real estate developer William Zeckendorf, who owned the Chrysler Building and Hotel Astor at the time.

However, New Yorkers did not like the idea of an airport obscuring the lower half of Manhattan, and the project never took flight.

Across the pond, the city of London could have also looked drastically different had an airport been built in the middle of the city at King's Cross, a busy subway station right at the geographic center of London.

In the 1930's, British architect Charles Glover envisioned an elevated "aerodrome" which would have been placed about the King's Cross station's sidings. The aerodrome would have been in the shape of a pinwheel with concrete runways shooting off in the different direction of the city.

Like the Manhattan airport, the Kings Cross airport project never saw the light of day.

What do you think about these transportation projects that never were? Would you have liked for these projects to have been completed? Do you think they were a good idea for these cities?