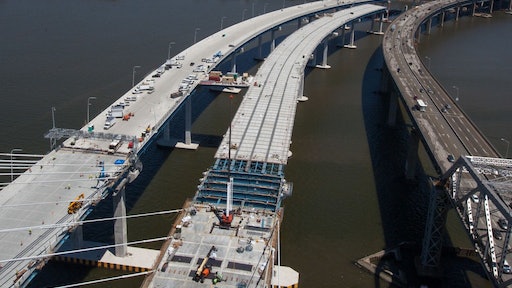 Infrastructure construction and funding has been on the construction news radar since long before the presidential election. Despite the lack of funding that is causing many problems across the country, there are still many major infrastructure projects currently under construction in the United States.

This blog highlights just a few of these projects, their plans and their current status as the end of the busy summer construction season is fast approaching. 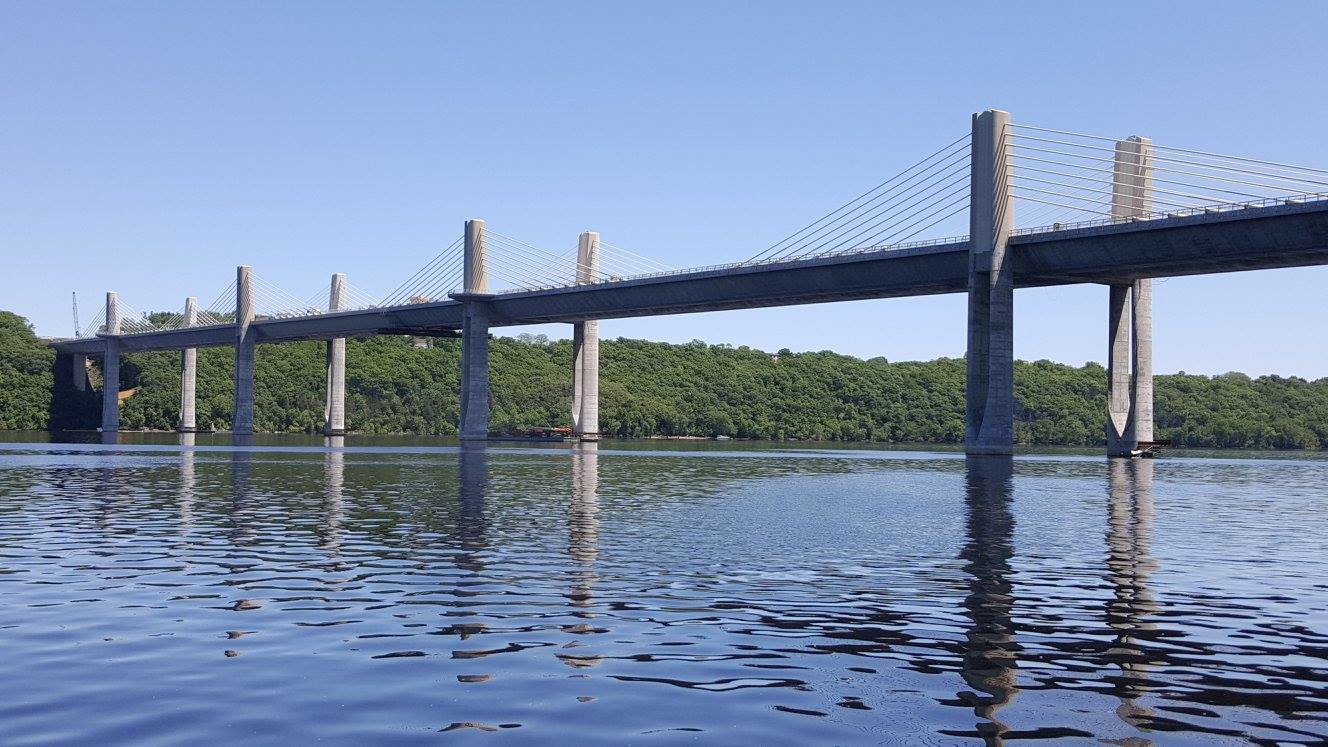 Completed this year and opened to traffic in August, the St. Croix Crossing bridge connects Wisconsin and Minnesota over the St. Croix River. The $646 million project started in 2012 and at its peak employed more than 400 laborers on the project. The 5,000-foot extradosed bridge features four lanes of traffic, is 100 feet wide, and stands between 110 feet and 150 feet above the river.

The bridge is a hybrid design that combines a cable stayed build with a segmented concrete box design. The design was used to ensure the pier heights would not be higher than the bluffs along the river.

There are more than 42 million pounds of concrete in the bridge. The 1.1 million square feet of surfaces required more than 22,000 gallons of paint.

Work is set to continue through November including removal of construction staging areas, removing temporary access roads, restoration of wetlands under the bridge and more. 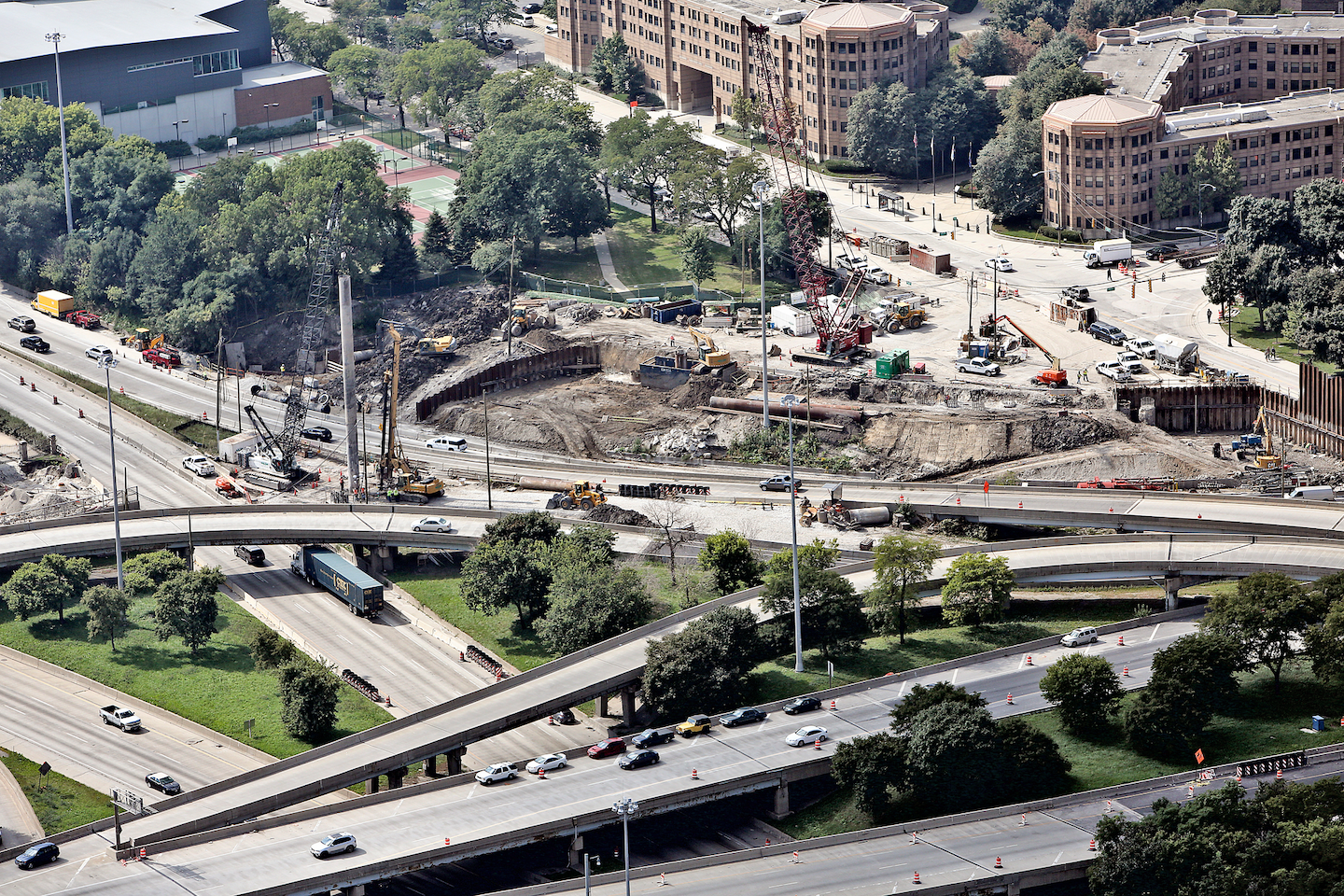 Construction at the Jane Bryne Interchange project in Chicago.

Located in the heart of downtown Chicago, the Jane Byrne Interchange (formerly the Circle Interchange) is rated the most congested interchange in the nation, according to the Illinois Department of Transportation (IDOT).

Construction of the interchange improvements is scheduled to be done in three stages. Stage one will be the Cross Road Bridges. Stage two will focus on I-290/Congress Parkway. Stage three will focus on I-90/94. 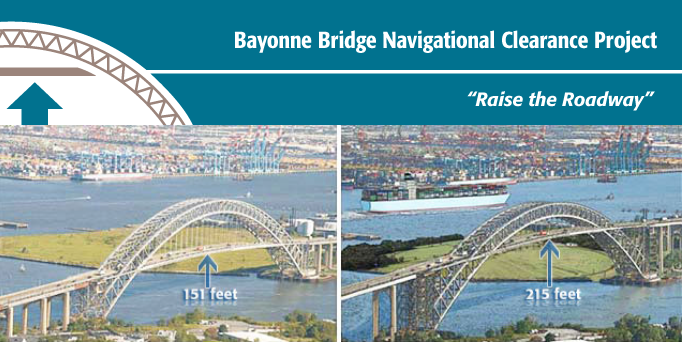 This $1.6 billion project will raise the Bayonne Bridge's 151-foot clearance to 215 feet allowing better access for shipping vessels to travel beneath it. The bridge connects Bayonne, NJ, with Staten Island, NY. This is the first major restoration of the bridge since it was built in 1931 during the Great Depression. While the roadway is being updated to modern design standards, the iconic bridge arch will remain in place.

The project started in May 2013 and is expected to be completed mid-2019. The new elevated roadway was opened to traffic on February 20, 2017. 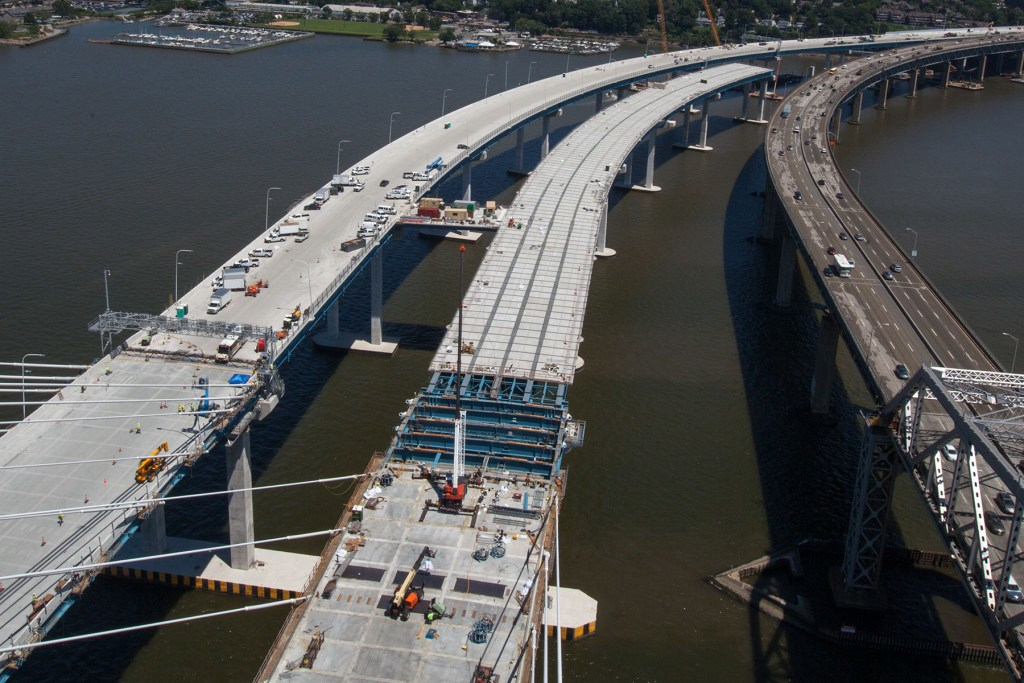 The $3.98 billion New NY Bridge is a twin-span bridge replacing the 3.1-mile Tappan Zee Bridge over the Hudson River. Construction began in 2013. Tappan Zee Constructors LLC, the constortium in charge of erecting the bridge) said the westbound span would be fully completed by the end of 2017 with the entire project scheduled for completion in 2018.

Most of the substructure work is now complete and construction crews continue work on placement of steel-blue girders, road deck panels and stay cables for the 419-foot main span towers.

Talk of replacing the Tappan Zee Bridge — which was completed in 1955 and not designed to carry the heavy traffic that travels across it now — started in 1999. After over $88 million taxpayer dollars were spent, 430 meetings held and 150 concepts considered the project had yet to move forward. However, in 2011 under Governor Andrew Cuomo the project began to take shape and start construction.

Construction of the bridge will include 14 miles of main span calbes, 50 miles of foundation pilings, 300,000 cubic yards of concrete and 220 million pounds of steel. 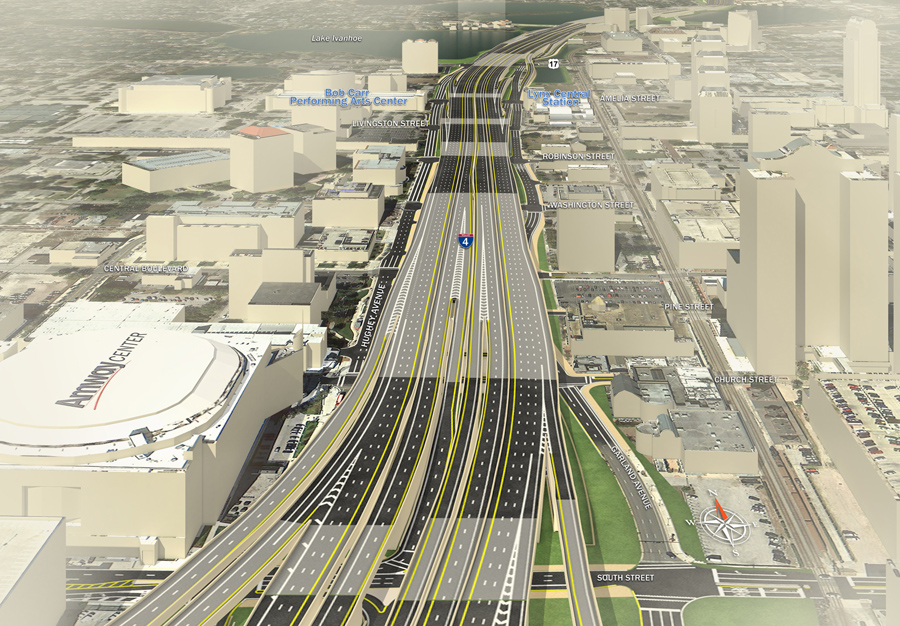 A rendering of the new I-4 Ultimate interstate.Florida Department of Transportation

The $2.3 billion I-4 Ultimate public-private partnership project in central Florida is rebuilding a six-lane, 21-mile interstate including 140 bridges and 15 interchanges. Of those 140 bridges involved in the project, 13 will be widened, 74 replaced and 53 added. All 15 interchanges will undergo complete reconstruction. This is the largest infrastructure project in Florida's history.

The project is also being recognized for its sustainable efforts. The project is recycling 99% of the concrete and steel in addition to also recycling asphalt, wood and plastics.

The project is scheduled for completion in 2021. 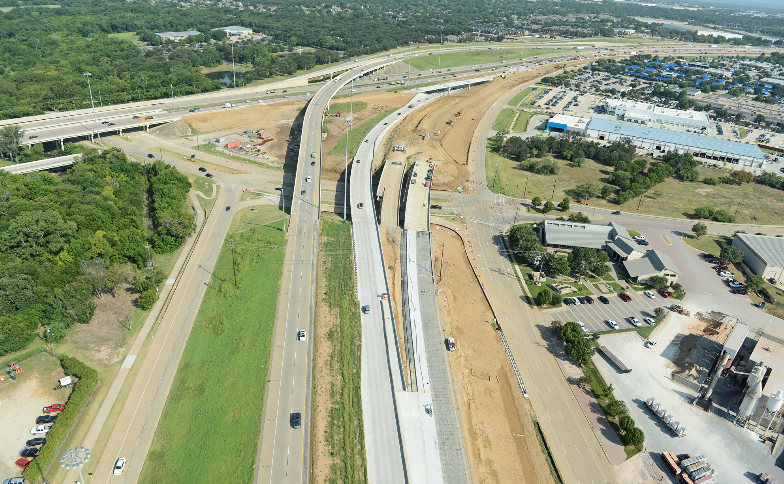 Paving and dirt work on the new SH 360 interchanges for the DFW Connector project.

Owned by the state of Texas, the DFW Connector includes state highways 114 and 121 and adjacent roadways located north of the DRW Airport in Texas.

The project includes rebuilding 14.4 miles on portions of four highways, two interchanges and five bridges. NorthGate Construction is working with the Texas Department of Transportation to develop, design and reconstruction over $1 billion worth of improvements. NorthGate is using a design-build process.

Construction began in February 2010. In August 2016, NorthGate began work on improvements to the SH 121/260 interchange in Tarrant County. While these improvements were included in the original project, funds were not available for this portion until February 2016.

Work that was being completed in the summer and early fall of 2017 included drainage and dirt work, median paving and wall work, and construction of all four new bridges in the area. 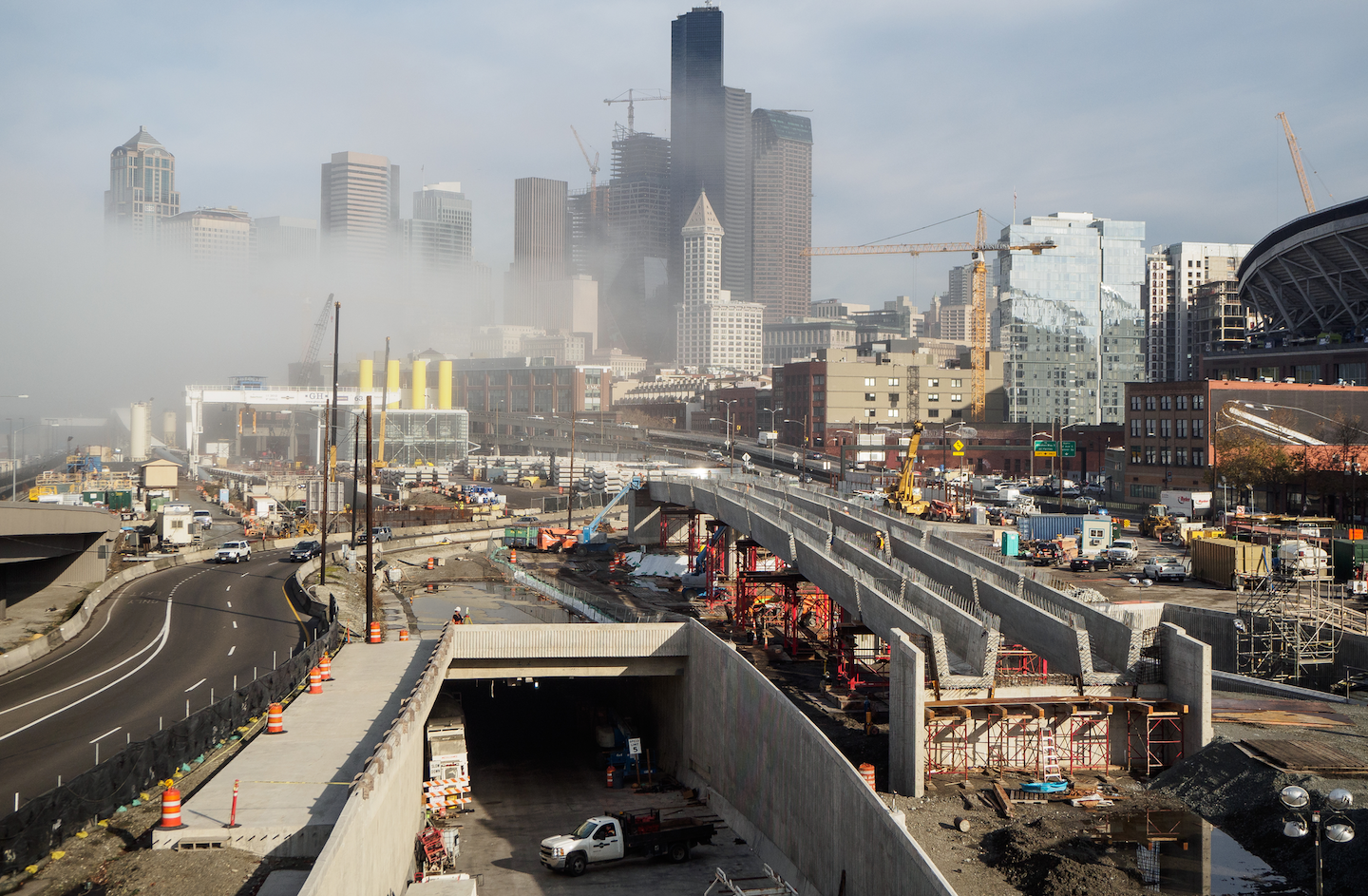 The Alaskan Way Viaduct is an elevated section of State Route 99 (SR 99) in Seattle. Built in the 1950s, it was time for the roadway to be replaced. The project includes a two-mile-long tunnel beneath downtown Seattle, a mile-long stretch of new highway connection to the south entrance of the tunnel, an new overpass at the south end of downtown, demolition of the old viaduct's downtown waterfront section and a new Alaskan Way surface street along the waterfront connecting SR 99 to downtown.

After all the delays during the boring phase of construction, the tunneling of the new SR 99 was completed in April 2017. In total, 1,426 concrete rings were built and installed as the boring machine "Big Bertha" ground through 9,270 feet of earth for the tunnel. While tunneling is now complete, there is still a log of work left to be done.

In 2011, crews demolished the southern mile of the viaduct — about nearly half of the structure. The remaining portion of the viaduct is set for demolition once the SR 99 tunnel opens to traffic.

Construction of the new viaduct started back in 2007. The project hopes to be completed by 2021. 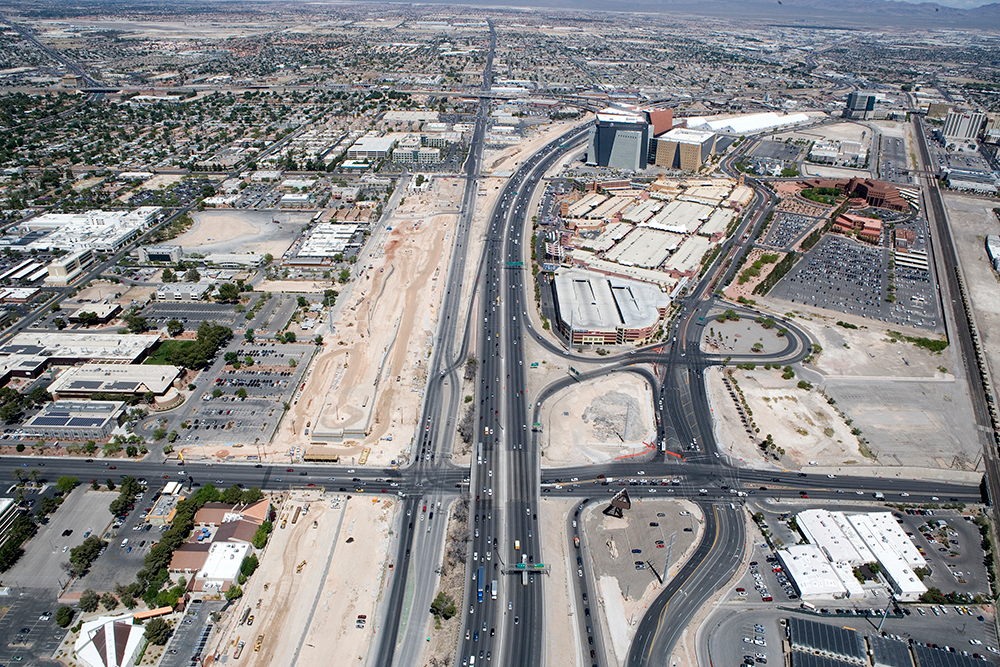 The largest public works project in Nevada history, Project Neon will widen 3.7 miles of I-15 — the busiest stretch of highway in the state. The project started in 2016 with an anticipated completion in 2019. It is projected to cost $900 million.

In August, work started on the MLK Boulevard on ramps to US 95 southbound. The I-15 northbound ramp is expected to remain closed until January 2018. MLK is being realigned with flyover at the Charleston Interchange. A new I-15 high occupancy vehicle (HOV) interchange is also being constructed to create a direct connect between U.S. 95 and I-15.

This 20-mile elevated train line in Honolulu will feature 438 spans and 21 stations. The $855 million project was scheduled to be completed in three phases. Phases one and two comprise 10 miles at the western end of the project and should be completed by December 2017. Seven miles of this stretch were erected either in the median or on the shoulder of an active two-and three-lane roadway. Design-builder Kiewit worked on the first two phases.

Shimmick/Traylor/Granite J.V. is in charge of Phase three, which will begin work on the next five miles of elevated guideway and the four rail stations planned for Phase 3.
The first phase of the rail system is anticipated to be operational by 2020 with the entire system expected to be fully operational by 2025.

I-11 near Boulder City Concrete wall placement on a bridge during I-11 construction in Nevada.

Interstate 11 (I-11) will link Las Vegas and Phoenix to relieve congestion and improve safety. The new $318 million, design-build I-11 project will be a four-lane interstate freeway to link the cities.

The Nevada Department of Transportation (NDOT) is constructing a 2.5-mile portion of I-11 from Railroad Pass to US 95. Known as Phase 1,

The $83 million Phase 1 will include a full diamond interchange with a loop ramp and a 600-foot-long, two-lane cast-in-place flyover bridge. Phase one is anticipated to be completed in January 2018.

Phase 2 — which is being built simultaneously by the Regional Transportation Commission of Southern Nevada (RTC) — is focusing on approximately 12.5 miles from US 95 to US 93 near the Hoover Dam Bypass Bridge. The cost of Phase 2 is $235 million. Phase two completion is anticipated for October 2018.

Both phases started construction in 2015.

While we know these aren't the only 10 infrastructure projects in progress in the U.S. right now, they are some of the more major, high-profile projects. Are there any other major infrastructure construction projects in the works right now that you think belong on this list? Leave a comment and let us know.