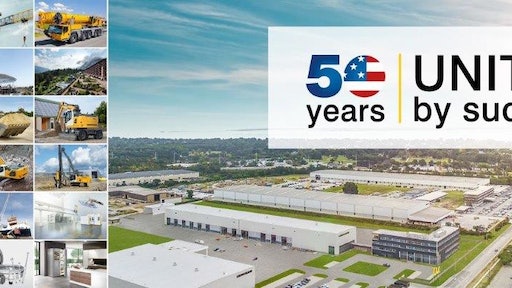 Liebherr is celebrating 50 years of success as a leading manufacturer in North America this year. With a 50th anniversary theme of  “United by Success,” the manufacturer remains focused on its commitment to U.S. customers.

Liebherr has been producing in the U.S. since 1970. The company is a leading North American supplier of construction machinery and other technically advanced, user-oriented products and services. It sells and distributes products throughout its own locations and through an independent distribution network.

Liebherr has built its U.S. business on a foundation of trust, innovation and engagement with customers. Five decades later, Liebherr’s growth, diversity and stability are evidence of how the company is "united by success" with customers as they work on the challenges of tomorrow and focus on the future together.

Throughout 2020, the company will focus on 10 innovative product divisions across the U.S. in addition to its commitment to the success of customers, business partners and employees.

“The ‘United by Success’ campaign shows that our customers and our company are one through each other’s successes and are stronger together,” said Torben Reher, managing director of Liebherr USA, Co.

Plans for 2020 include Liebherr completing the expansion of its Newport News, VA campus, introducing new technologies and equipment and having a major presence with customers during industry trade shows. The anniversary campaign will engage with customers on web, social media and industry events, including a dedicated U.S. anniversary landing page and video.

Liebherr will unveil special anniversary exhibits and host VIP events to thank customers for their loyalty throughout the last five decades. The exhibits and VIP events will be held at CONEXPO-CON/AGG (Las Vegas, March 10-14) and MINExpo (Las Vegas, September 28-October 1).

To keep pace with its growth, a new $60 million state of the art expansion will be completed in spring 2020 in Newport News, which will be home to Liebherr USA, Co. The site is adjacent to the company’s current facilities, where Liebherr has operated for its first 50 years. The new buildings will add more than 251,000 sq. ft. to the existing 560,000-sq.-ft. campus. Additionally, Liebherr has 13 other locations across the U.S.