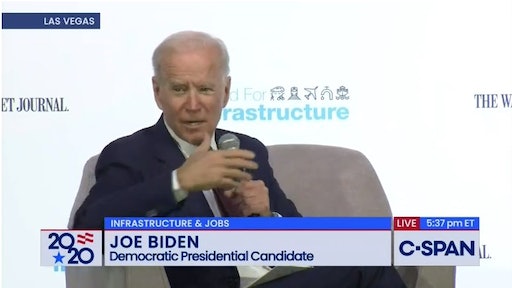 More than 90 percent of swing state voters believe that the next President of the United States should prioritize a strong infrastructure system that bolsters the economy, creates jobs, protects consumer safety and supports our security. As voters in Nevada and across the nation head to the ballot box this spring, the Moving America Forward Forum offered presidential candidates a platform for addressing these key priorities and issues that impact every American.

Infrastructure got more attention than usual from four Democratic presidential candidates at the campaign forum billed as the first-ever to focus on the issue. All agreed the nation needs to invest more to repair aging roads, bridges and other infrastructure, as well as building modern projects, but they carefully tip-toed around whether to raise the federal gas tax for the first time since 1993 in order to fix them.

There's a lot of desire to move the conversation about infrastructure forward but will this be a priority for the candidates? What's the use for the funds you will get?

"I think we start off with fixing the broken infrastructure in a modern way," Biden says. "We're going to spend billions more over time at these collapse... if we don't fix our bridges but we can modernize them in a considerable way in terms of making them energy efficient. We have to maintain not only what is out there that hasn't been maintained but the new initiatives must be more capable of sustaining longevity without the intensive maintenance that's been needed in the past. It's called technology."

Biden went on to say he wants to create new labor focused, "good jobs" that increase the efficiency of our infrastructure while also making it green. He focused heavily on transit and high-speed rail to relieve congestion on our roadways to modernize and change economic growth without adding vehicles to highways.

Steyer said that the best way to improve infrastructure was to raise taxes and spend money to fix it, but made it clear that his focus will be on the environment.

Klobuchar came on stage stating the fact that she was the first candidate to start discussing infrastructure when she unveiled her $1 trillion plan. 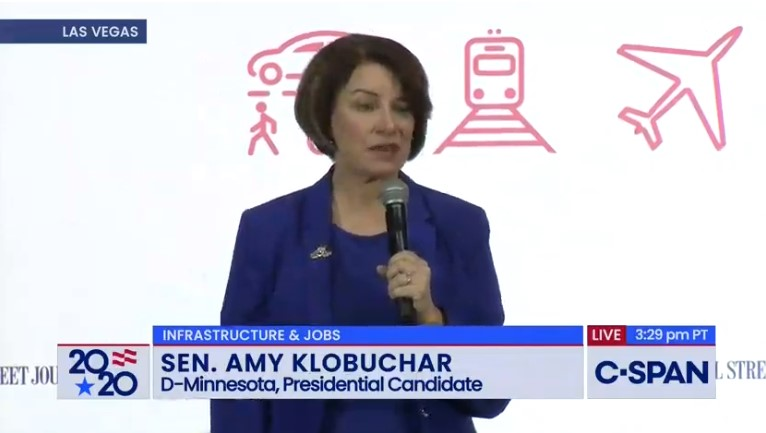 Senator Klobuchar went on to discuss the lasting impact of that collapse on her community and the lives that were lost.

"We have to fix existing problems with our roads and bridges and then make sure we're making that climate resilient as well and it's very important for any candidate in this race," she says.

"As a political figure there's a lot of incentive to create the new exiting thing but we have to get back to basics too," he said. "Mine is the only infrastructure plan that works to make sure that federal funding that goes to states for fixing roads actually fixes what we've got in addition to adding new and exciting things. We cannot continue to add new pieces out there if we're not willing to look after what we've already got."

How will you pay for this? The Highway Trust Fund (HTF) is pretty much insolvent and revenues are declining with more fuel efficient vehicles.

“We’re not going to be able to raise the gas tax, we might be able to index it down the line,” Biden said on stage, citing opposition from Republicans to raise taxes. Under questioning from two Wall Street Journal editors who moderated the individual sessions with each candidate, Biden leaned heavily on repealing part of the Trump administration tax cuts as the main way to raise money for infrastructure investment.

Steyer said the federal gas tax is “super politically sensitive.” He added, “What we are definitely going to have to do is raise taxes.” He also prefers to undo the Trump tax cuts. "My goal in this is to raise wages and have more money come in in a much more progressive fashion and rebuild America in a way that everybody knows we have to do and and we can easily afford to do it, we just have to get over the idea that rich people don't pay taxes anymore."

Klobuchar said the reason we have not seen an infrastructure package under Trump was due to the fact that he would not face he funding issue with our Congress, something she promises to accomplish.

"The Trump tax bill would have been the perfect opportunity to combine tax cuts with infrastructure," she says. "So I would take some of those Trump tax cuts [...] and use them for infrastructure. We need to make sure the money goes towards good projects and that we distribute the money fairly across the United States."

In his plan, Buttigieg wants to inject $165B in to the HTF and lays out ways to do so.

"I think the time has come for my party to to assert ownership of fiscal responsibility," he said. "I believe in having pay-fors for all of the things my campaign put forward. I'm not talking about going back to Eisenhower, I'm talking about rolling back the Trump corporate tax cuts and closing loopholes..." 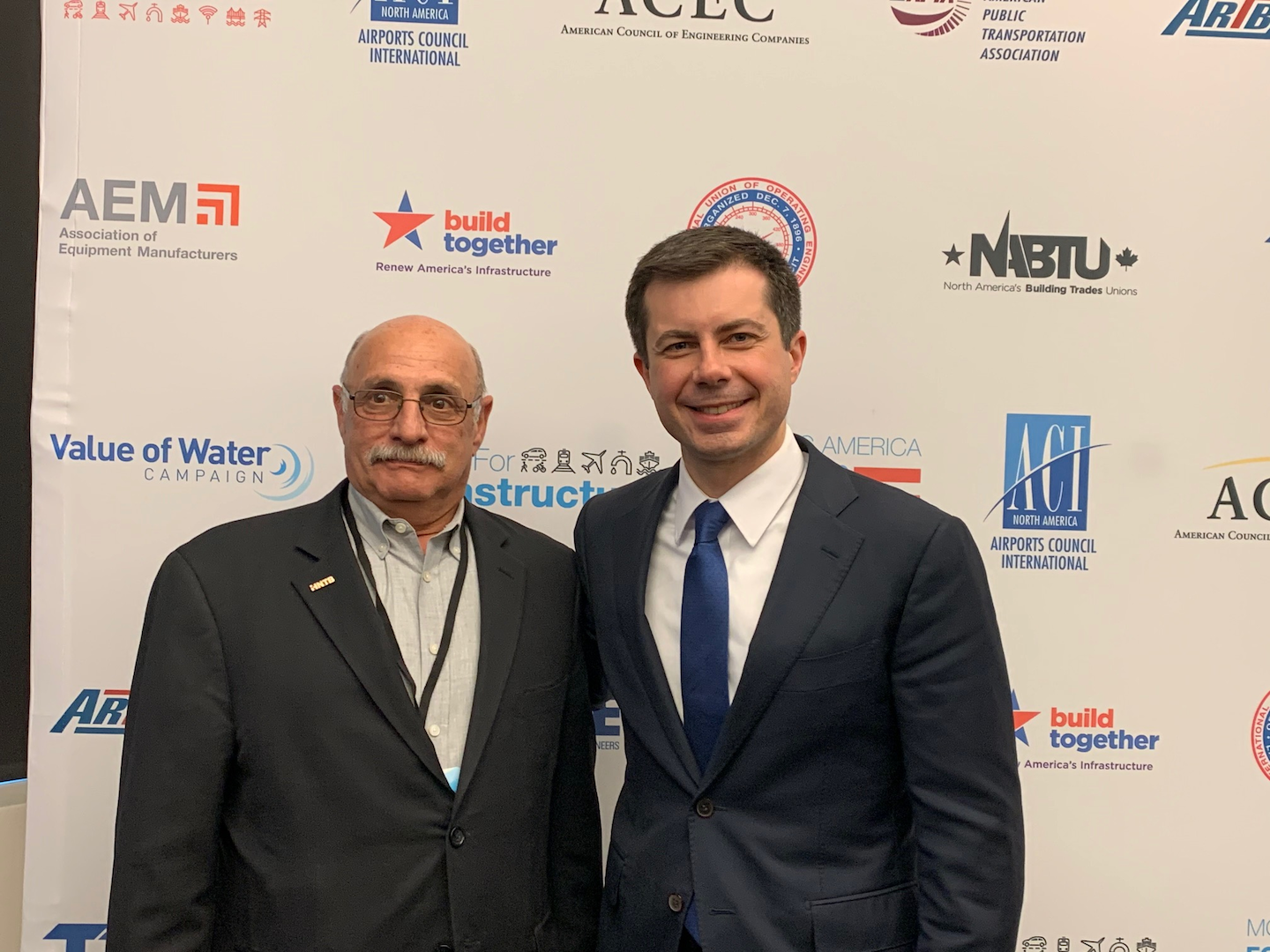 All four candidates said they support more commuter and high-speed rail investment to reduce highway traffic. “I’m not asking for Japanese-level rail, I would settle for Italian level,” Buttigieg said.

Biden said he favors raising the Passenger Facility Charge (PFC) for airport infrastructure investment. Klobuchar said she “would be open” to hiking the PFC.

During President Trumps 2020 State of the Union, his remarks on rebuilding America's crumbling infrastructure was one of the few remarks which had members from both sides of the aisle standing in applause. How do we take advantage of this bipartisan sentiment for infrastructure?

Biden was asked about reducing regulations to increase bipartisan support and says it needs to be done the right way. "We can in fact streamline significantly without damaging the environment," he said.

Klobuchar agrees, but with caution and with support for trade Unions. "I am always open to looking at rules and regulations to see if they work better. However, I'm not going to mess around with safety or the environment but we can look at each rules and see if there are things we can do to make them work a little better."

She was also quick to say she was a fan of prevailing wages. "If you're going to build a bridge or a highway or rail, you want to make sure that the wages are fair for our workers. The whole idea here is to allow people to share in the prosperity of our transportation system."

Prosperity for our country was a key sticking point for Buttigieg as well.

"We have to decide if it's OK for the greatest country in the world to have inferior transportation...," he said. "Whether we're talking about the Northeast corridor and the work that needs to happen there or whether we're looking at the bigger picture nationally, we're going to need investment and Federal leadership to make sure that the parties are talking to each other. We need to make sure we're bringing the parties to the table."

“Infrastructure is everything, for better or worse,” said Zach Schafer, CEO for United for Infrastructure, which organized the event coalition. That unfortunately reduced the time focused on transportation, as the candidate conversations not only included drinking water, the electric grid and rural broadband, but also stretched into whether natural resources or affordable housing should be considered part of the mix.

Despite the mixed bag of what infrastructure will actually mean in Washington in the future, here's hoping talks of spending money to improve our nations roads and bridges continue to advance in Washington.